Live Set Up Without Direct Box

Hi.
I have a question regarding my live set up while using Gig Performer.
I currently use un Focusrite Clarett 8 with a Rack of 8 Behringer DI (Not the best direct box Ever.)
So currently my sound goes out of my audio interface (symmetrical line signal) to a DI with a mono TS jack to be converted to (I Guess) a Line level symmetrical.
Here is my issue I fill like using a DI just dommage my signal cause of the poor quality of them and isn’t really useful appart from the Ground Lift Feature.

My question is:
Could I just use a TRS Jack To XLR with a switch to remove the ground in case of ground loop to have a cleaner signal?

The Behringer DIs aren’t as bad as many expect them to be.
I assume that your issue isn’t caused by bad quality but caused by going from symmetrical Out to Mono cables.
Since i’m using the symmetrical outs of my RME Babyface I never needed a DI Box anymore.
So I would recommend to use your symmetrical outs without DI but with TRS cables only.

That good to know that someone do it without DI.
And you never had any issues with ground looping?
It is my main concern.

I am very surprise of the way you are using a DI box. AS far as I know a DI box takes an intrument signal (typically the signal out of your guitar which is neither a line level signal nor a Mic level signal), keeps it as it is on one output and converts it on another output to a Mic signal such that you can record it using a Mic preamp. Why would you like to enter the output of an audio interface (which ha a line level signal usually not compatible with a DI box) into a DI box? There is probably something I missed here…

I fill like using a DI just dommage my signal

Why do you think that the Behringer DI does damage your signal? What is connected to the DI outs, where does it go to? Mixing console, stage box? Does anyone complain about your sound?

You can’t convert an unsymetrical TS line out to a balanced XLR signal by a cable. Otherwise, DI boxes with their internal electronics (if active) or transformers (if passive) would be unneccessary. It’s not just the ground lift.

TS line out has one wire with a voltage referenced to the shield or ground which is the second wire. If you open that ground, the electric circuit would be broken.

XLR has two wires with a differential voltage between them, none of them referenced to ground. Plus a third wire which is the shield or ground of that cable. If you open the ground on one side (ground lift), the shield is still grounded on the other side, and the two signal wires are still a closed circuit.

There are some sort of cables for a connection of both, but this would loose all advantages of symetrical or balanced cables, like lower signal loss for longer cables, immunitiy against all sorts of electromagnetic interference, and avoiding the omnipresent ground loops, electric potential issues and humming on stage.

Similar to @Beatlab, I use an RME Babyface, too. We don’t need DI on stage with this, because it already has two symetrical (=balanced) XLR out jacks. Your Focusrite has unbalanced line out with TS jacks, only. Good for studio, not so good on stage, if you have longer cables to a mixing console or stage box. If it would have balanced TRS out jacks, then you could use a cable to XLR.

PS: Before having the Babyface, I had unsymetrical TS line out, too. I always used DI to convert to symmetrical XLR before going into the stage box to FOH, because of the mentioned reasons.
Line level is no issue for DI. If the level is too high, most of them have a knob for input padding (attenuation).
@David-san is right in that sense that line level signals are less sensitive to interference, compared to mic or guitars with much lower level. But a typical stage box to FOH has only symmetrical XLR inputs, so even then you need a DI.

If it would have balanced TRS out jacks, then you could use a cable to XLR.

PPS: I have checked the manual of the Clarett. IT HAS BALANCED TRS out.
Forget most of my comments, you can use a cable adapter from TRS line out to XLR, and have all the advantages of balanced signal lines without a DI! 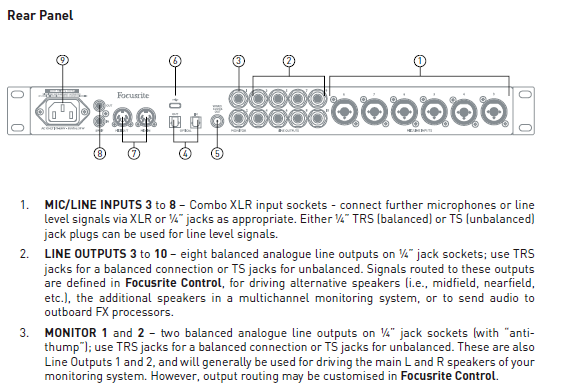 Forget most of my comments, you can use a cable adapter from TRS line out to XLR,

I was going to say the same. The Clarett is a pretty decent interface and has all balanced outs.

I use DI boxes on the output side of gear with unbalanced outs, but not with balanced outs. And I used use stereo TRS to XLR cables where needed for those without a problem. As long as you’re going to a mixer that can handle line level signals on XLR ins.

Thanks for all the answers.
I know all my mess with DI wasn’t right but my main concern was to prevent buzz and ground noises cause I always play in differents venues.

But as I see that all of you just use the balanced output of your interface direct to the patch/desk.
I’ll try it.

Same here. Since we always plug into our own equipment, I just do balanced cables into my audio interface and into our mixer

Why would you like to enter the output of an audio interface (which ha a line level signal usually not compatible with a DI box) into a DI box?

A reason for that could be to try to prevent groundloops, or when you do not have balanced outputs. Btw there are di-boxes that can handle line levels: I think for example this one: https://www.bax-shop.nl/ground-loop-isolator/art-dti-ground-loop-isolator?srsltid=AeTuncp53ClHZ-gjD-Y7Y5oR6j1nUVIZjKmR5qzfO5qXEqhlJHvdIUsJh-4

Detail: I used one of these, but because the piano didn’t connect to ground, I had to undo the ground-lift

For a chance I never had to prevent a groundloop in the last thirty years. But, I will remember this in case I will have to in the future.

when you do not have balanced outputs

I have balanced line outputs, but here again, I am not sure it really helped that much until now. For a Mic level with a long cable, for sure (and for Shure too

), but for line outputs… In the past I had no balanced outputs and I am not sure it was really worse…

I am not sure it was really worse…

When you’re at line levels it might not be very important. But from a mixing engineer’s point of view: balanced configurations work nice, and standardization is the mother of predictable outcome (and sometimes a lot of trouble also

Lots of equipment having balanced outputs just fake these, by not using an inverted signal, but a fixed voltage of 0 volt outputted with some impendance. The real work is done anyway at the input side, by using a differential input. Therefore it’s sometimes possible to connect (at the output side!) the ground and ‘negative’ lead to each other and stil have the benefits of the balanced input.

But I remember a tube-amplifier of which both leads of the balanced input had a rather high bias voltage. That one went berserk, when you tried to connect one of the leads to the ground…

The same type as this one: 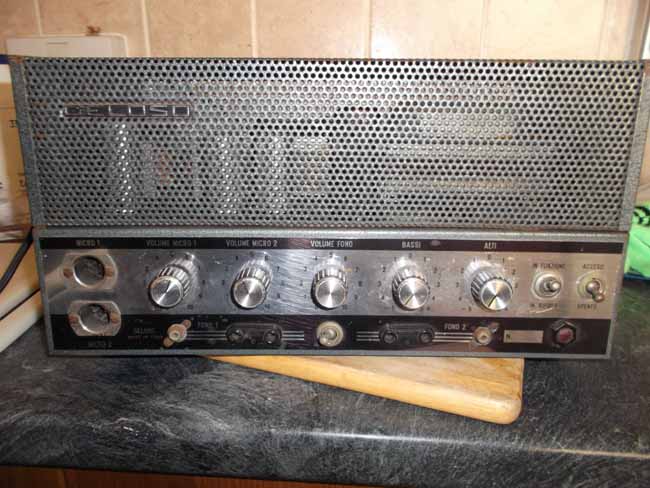 TL/DR, use XLR-TRS cables or adapters and get the “gender” on the XLR correct.

I use TRS - XLR male snakes to connect my keyboards to our stage boxes (Yamaha RiO 3224/1608/I08). In our mixing room, I use similar cables to connect our Apollo to the Dynaudio Monitors. Basic concept, assuming everything is correctly wired, you can unbalance a balanced circuit by using TS to XLR and get lots of issues. You can’t balance an unbalanced circuit (TS) without a transformer (like a DI box). This is independent of signal strength which is either mic, hi-z (guitars and basses), or (in the case of most keyboards and interfaces) line level. As mentioned earlier, take care not to connects a line level signal to a consumer -24v input Jack. You’ll overload it almost immediately, and could damage the input. If that’s all your mixer has… get a cheap behringer mixer… or you’ll need an analog pad (physical box) or to use a pad on a DI.

In the past, I’ve connected a TRS to a DI coming off either a Scarlett or my keyboard(s). But really, this was extraneous when simple adapters would’ve done the trick—bonus: they’re cheaper than a DI.

We carry DI boxes in case of ground loop; however, with balanced signals the hum is usually more indicative of a power leak. In that case, a ground lift won’t do anything and could make it worse or dangerous. A “hum box” might help in that situation; but if it’s a cable hum box and not a power outlet isolation box, it will be what guitarists have called a “tone suck.” You’d also need to take care that your box is Balanced to Balanced compatible, which can be an issue with some EbTech boxes. If not, you’ll find the transformer gobbles up something like 15-20db of your signal’s gain.

Most likely, you’d track down what plug is causing the issue and hopefully plug it into a different circuit… unless the issue is an A/C unit, dehumidifier, or lighting. That can create its own issues.

Long but really useful thanks

Could I just use a TRS Jack To XLR with a switch to remove the ground in case of ground loop to have a cleaner signal?

It is really not advisable to do this kind of DIY.

If the audio interface has balanced outputs, it is better to use a passive neutral system to eliminate interference: I always have this kind of device in my stage equipment just in case: it is a dual transformer/isolator. And on the other hand I use it regularly off stage for unsymmetrical connections.

“It is a totally passive device that uses a pair of transformers to separate input and output signal grounds, thereby isolating two systems and reducing hum and ground-loop noise.”

The one I have is not very expensive, the filtered signal remains faithful and the measured dynamic loss is less than 1 dB.