since you pinged me:
I never used a channel strip, i don´t know where in the chain you would use it.
probably bevore the final Reverb i would guess ?
personally, i made it a habit to have a Limiter as the final plugin !
nothing behind it !..Limiter => Audio out.

behaving otherwise, holds also the risiko to forget to have that limiter in place.
i´d recommend to have that end of chain limiter anyway !
the TDR is 30$ right now.

for me, it has nothing to do, with preventing the patch from creating unwanted distortion.
For that i use a comp within the patch.
The end of chain Limiter is your savetynet when the worstcase scenario happens ( a plugin fails, and quits with a type of “sound explosion” / as sayed: it happened to me several times /…even afterwards i forgot sometimes to add that limiter / it has cost me some concetration to MAKE it a habit. )

Just speaking for myself with my musician’s hat on…

Looking at the two plugins in question, I must admit I find the one on the left quite a bit less intimidating.

Clearly this kind of thing is a matter of taste and the good news is that there are enough choices out there that people can have whatever works best for them. 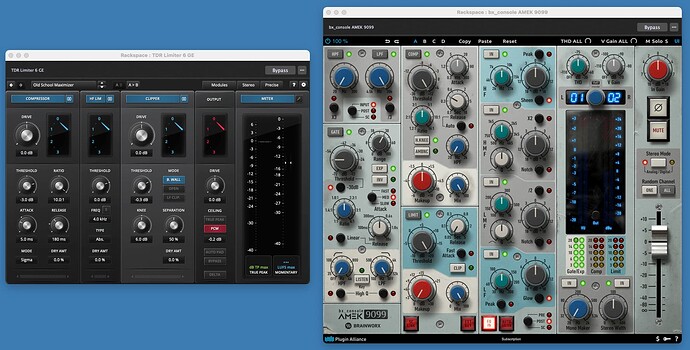 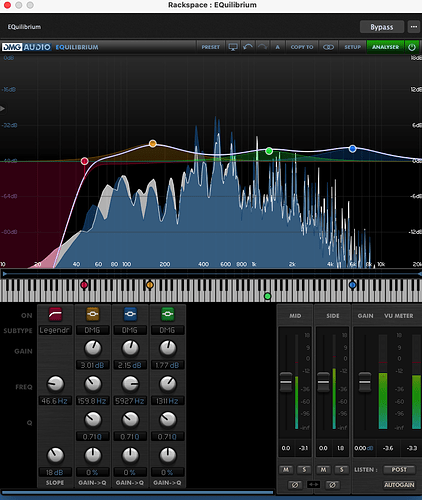 yup, me too.
i found the Amek 9099 tempting for 30$, but decided to keep that money.
I use the Fabfilter pro-Q.
Visually, similar as yours.
its just so much more inspiring to set the EQ frequency ! and overall way quicker to handle than any console style EQ.

thanks for the feedback…sound like there are no special requirements or needs for the limiter / safety-net before the audio-out - more a personal choice.

related to the recommended EQ:
Fabfilter Q and EQuilibrium are both nice but so far i have not seen a good deal.

My two cents worth - I have a number of different equalizers and limiters in various products I own, but I wind up using many of the Melda products in most circumstances. I really like them, I’m sure part of the reason now is that I have used them enough that I understand the way that their plugins work which is consistent across their product range.

Yes!
For example: I’m a keyboarder in a cover band playing many Rammstein songs. I have many sound FX, samples and synth arpeggio loops which should be earth-shaking. In many cases I have to push the average loudness of these sounds quite to the top. At the same time I need to tame the peaks, so my interface is not clipping, or worst case, the input of the FOH desk or power amplifiers are clipping.

Typically, most digital FOH desks and digital processor-driven Class-D power amplifiers have limiters in their chain active, too, but these are out of your control regarding threshold and dynamics. So I take care of my peak levels with the TDR limiter chain, while maximizing loudness with the built.in compressor, in total with very very low added latency. In my case with my settings, 12 samples = 0.3 ms. Not preceivable, but this small look-ahed helps the TDR limiter to tame the shapest peaks.

We play often at venues where the locals rent the PA. Their FOH sound engineer doesn’t know us or my sound FX. Without limiter he would be scared to death after a few songs, and would pull my level faders down for the remaining show.

I’m using such limiters as final plug-ins since many years, and often the FOH guys praise my sounds delivered at rather constant levels after the show.

EDIT: Most channel strips offer not that level of control like a dedicated limiter plug-in. In fact, I tried many limiters and the like in channel strips over many many years, and I’m a big fan of the TDR limiter, now.

Yes, but that’s a delay.

Also, I was hoping to start transitioning my Steely Dan setlist to use the global rackspace with a master audio mixer and a limiter on each stereo pair but then I discovered that each instance of Loudmax adds 2% to CPU even when it’s not doing anything. That’s a lot!

each instance of Loudmax adds 2% to CPU

That’s strange, I’m not getting the same result on Windows. 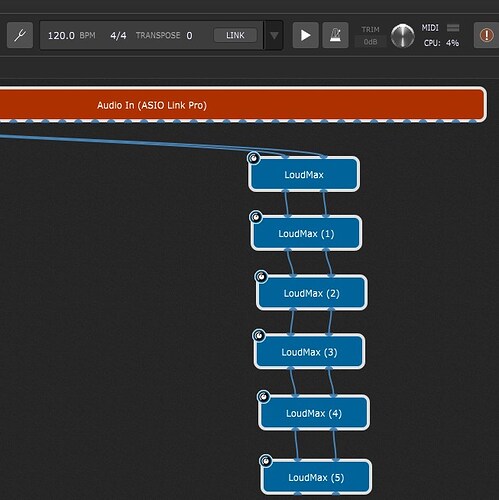 Each instance does add 1.2ms of delay, not bad.

Each instance does add 1.2ms of delay, not bad.

That is: Not acceptable.

It all depends on how much delay you’ve accumulated to that point. 1.2ms isn’t perceivable on its own.

Well, ok, it’s a very small constant delay and not a latency jitter of any badly programmed blockwise audio processing which would kill the groove. But it adds to the overall latency, a little bit of latency here, some small delay there, … not the kind of painting for me. That’s why I stick with the TDR limiter. 0.3 ms in low-latency mode are definitely no reason to argue.

I will try the TDR

I use barricade by ToneBoosters. It’s amazing. All the toneboosters stuff is amazing. Like FabFilter but a fraction of the cost.

I picked up the Tokyo Dawn TDR limiter on sale yesterday. Very useful in my GP guitar rackspaces to even out the volume difference when I switch between my main guitar’s humbucker and single coil pickups. Works like a charm. The plugin’s meters are great. No unpleasant artifacts or problems using the low latency setting. I set up a switch widget to bypass the TDR with my Pacer foot controller for some A/B checks and was pleased that there was no negative impact on my sound when using the plugin. If I’d been blindfolded the only way I’d have known it was on or off would be the volume difference between the two pickups when the unit was bypassed. Pleased with the purchase.

Thanks for mentioning the sale, I might have missed that!

Any recommendations for best practice settings of TDR?

Great deal! I use the TDR Limiter 6 GE in a global rackspace as final plug-in for my stereo sum before it goes to FOH. Some gentle compression, a peak limiter and a final soft clipper, to provide consistently powerful sounds to FOH without the danger of transient peaks and distortion, even with extreme sound sample FX. Running in low-latency mode with 14 samples = 0.3 ms. If you max it out there is inevitably some small audible artifacts but much less compared to a clipping audio in at a digit…

There is a zip file with a gpp_vst file for loading into the TDR Limiter from GP.