This problem is really strange. I will do my best to explain.

I have been using GP since version 3 and can’t remember if it happened then, but I would still consider myself a novice. When I play Kontakt instruments that include Multis, everything works just fine. However, if I switch to a single instrument, my MIDI controller produces no (signal?) sound. I mean, I know the MIDI controller doesn’t produce sound in itself, I am just no getting any output in Kontakt. However, I do if I click the onscreen keyboard at the bottom of Kontakt.
I tap all over my MIDI controller and do not see it activating any keys on that same onscreen keyboard.

But when I close that instrument and open a Multi instrument, it plays just fine, even within the same session (not closing GP down or anything).

I looked through the settings in Kontakt and do not see any differences. I also tried moving my transpose up and down on my controller just in case it wasn’t in range of the instrument.

Another thing is, is that when I use Kontakt via Cubase (11), the single instruments play just fine via my MIDI controller. No changes needed.

This only happens with Kontakt. All other VSTs I use don’t have any issue (Omnisphere, Serum, Dune, etc). 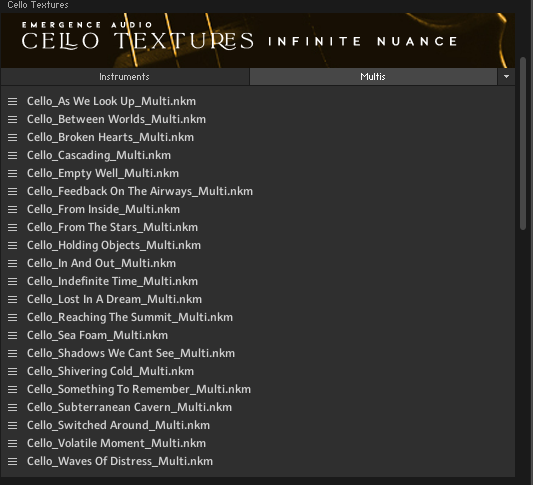 What else do you need from me to help us all solve this thing?

To start with, probably a screen image of your actual single instrument, a screen shot of the global MIDI Monitor showing incoming MIDI.

Also, if you can, insert a local MIDI Monitor after the MIDI In Block, open that up and screen shot what you see there when you play notes on your controller.

All righty. Lemme work on getting that stuff.

Well, holy crap. I just figured it out. The MIDI Channel was set to something different. I feel like an idiot. This has been going on for over six months. I don’t know Kontakt that well, so that explains it. And I need to get a bigger monitor for my old eyes.

Thanks for mentioning the things you did, because that’s where my eyes went.

My apologies for overlooking that.

It was set to MIDI Port A 1 and when I changed it to Omni, it worked, because that is what GP MIDI In is set to.

Thanks for steering me!!

The MIDI Channel was set to something differen

Yes, that was precisely my suspicion which is why I asked for those particular screenshots

Pretty much every time I load up Kontakt with a new sound, I wonder why I can’t hear anything until I, once again, remember I have to change the midi channel to omni.

Yes…this would happen to me when building multis. It took me a bit to discover that each new instrument was assigned a different channel.

I have to change the midi channel to omni.

I also initially double clicked a new Kontakt instrument, but dragging/dropping it over the first (existing) one made the problem go away. I also had to check not accidentally having two instruments under one plugin (in on GP plugin box), where the first was used and the other(s) were not, but probably still loaded and using resources.

Again, users should leave their midi controllers on channel 1 and if they want controllable layers (e.g. multiple Kontakt instruments but control over which subsets are in use) they should use separate MIDI In blocks to map incoming MIDI from the controller to the desired channel.

Again, users should leave their midi controllers on channel 1

I also do this, however, maybe if there is a better solution, correct me.

My keyboard has 8 pads (for drumming/effects), and I put these on channel 10 to be able to differ between normal notes on my keyboards and the pads. Then I typically remap them in a MIDI In block from 10 to 1 and direct them to the plugin for the sound assigned to the pads.

Yes, I do that as it is the only choice if both keys and pads are on the same physical device (and hence show up on a single port)
But if you have multiple keyboard on different ports, then it usually makes sense to have them all on the same MIDI channel since they can be distinguished by port.

Thanks for the confirmation