Kontakt Player 5 is cut in half

I am running the Gig Performer trial before I purchase it. I was using Nial Moody’s Pedalboard as a VST host but it has some issues. When I open the Kontakt Player to edit its VST instruments, only the left half of the window appears in Gig Performer. There is no way to expand the window to full size. Is there a way to fix this? I also had that issue with Omnisphere and Trilian but Spectrasonics has instructions to alter the display compatibility, and these two now open in their full windows. I just cannot get Kontakt player to do the same.

Funny I was about to post a similar (but possibly unrelated) question… when I run the full Kontakt, the interface is so big that I can’t see the bottom of it off the edge of my screen (which is funny because I have a 4K screen). Usually this isn’t a huge problem, but it means I have to navigate some of the drop-down menus totally blind. I’d love to figure out how to resize the window.

Sorry, I have Kontakt 6

What version of Gig Performer are you using?

Do you have another DAW where you can reproduce the issue?

I don’t want to hijack @keyboardtek’s thread; I was just here to offer solidarity.

I used Pedalboard VST host for years and Kontakt Player opens fine. Same when opened with Cubase. Only have an issue when using Gig Performer. I should mention that I have an Nvidia video board and use two monitors.

The latest download of Kontakt player, the latest version of Gig Performer. I just had a fresh upgrade from Windows 7 to 10. Also a new larger SSD drive for the C drive was installed. I have an nvidia video card and use two monitors. I tried changing the screen resolution but still only half the window appears.

Can you upload a screenshot showing the issue?

Here is a screen 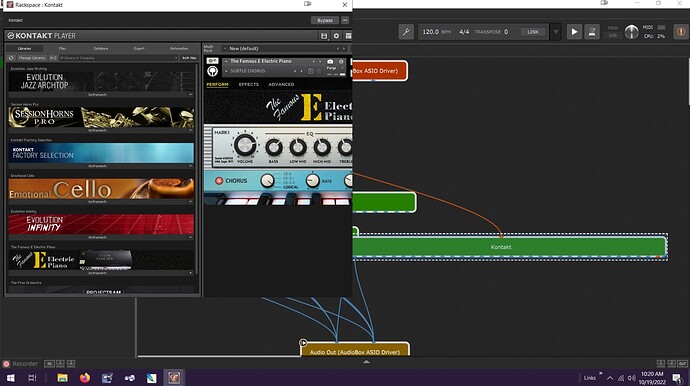 What happens when you hide the library tab?

Have you tried this?

Thanks! I had no idea that function was available. I did manage to install Kontakt Player 7 and its window opens correctly.
Thanks to all the responses.