Issue: AU does not show up in the plugin load dialog

i had this repeatedly the last months:
i install plugins, but the AU does not show up within GP4 in the plugin load dialog context.
I had right now a fresh case, and finally checked my plugin / Component folder,
and look: the .component is there !..the AU has been intstalled
( several install attempts taken btw. )

ok, i just checked:
for example can i load sayed plugin within live11.
so i must guess this “inconsistency” has something to do with GP4.
maybe there is something you GP Devs can check ?

i like to use AUs, its important for me vs. a preset save consistency vs. the plugins
i´m on a M1mac/BigSur
and i permanently (manually) run the plugin manager by new.

For AUs, it’s sometimes necessary to reboot your Mac to be recognized properly by the system.

yup, its not something i necessarily think at, when installing plugins.

But: my computer gets shut down every night anyway.
The plugin that triggered me now has been installed 3 days ago.
( and was 2 times reinstalled / for sake of completness; i just powercycled my Mac)
its not there

I had also issues with Fabfilter plugins for example vs. AU.
Some 1-2 were not showing up as AUs. But these seem to be there now.

i have developed the habit to load everything strictly as an AU.
it has helped me alots to avoid “plugin preset management” confusion

I never use AUs. I’ve found them flaky. I strictly use VSTs, 2.4 if available, otherwise VST3

I never use AUs. I’ve found them flaky.

what issues have you had ?

my point is: plugin-preset management. Since i have logic pro too.

i´m still not completely shure vs. all this preset handling.
i use GPs own save/load context vs. plugin-preset handling.
I understand: i can´t open such a GP made plugin-preset within logic.
But; i can load at any time a plugin (AU) within GP, …load a plugin preset, and save it new under the plugins own “Save dialog”.

As far as i understand can i not switch a plugin specific preset from VST to AU, or vice versa.
it was all very confusing for me, and still is…
Dealing with “AU only” seemed to be the best solution.

If it works for you, fine.

Personally, when I use Logic, I just have it record audio or MIDI and I drive Gig Performer from it so I never insert plugins into Logic itself.

I prefer to use AUs as well (for no good reason beyond being a big time Logic user) and I have an M1 Max machine (Monterey) but I have not yet had native AUs not show up - in either Logic or in GP. I don’t run Rosetta.

What specific AUs are you referring to?

I just have it record audio or MIDI and I drive Gig Performer from it so I never insert plugins into Logic itself.

well, you made there a point

my point was so far more a theoretical one. need to go into myself

but the missing AU (within GP) is still bothering me

What specific AUs are you referring to?

right now i miss the Tonsturm SpctrlEQ. its a new one. FFT based. sort of a Spectral EQ.

i had also two plugins from Fabfilter missing as AUs.
but they are in the meantime there ( showing up in GP)
Some few others too. I don´t remember what exactly.
i mean, i was so far under the opinion that the AUs just did not install. But that was a wrong assumption, as it looks now.

a screenshot, …but the AU is there in the plugins / component folder 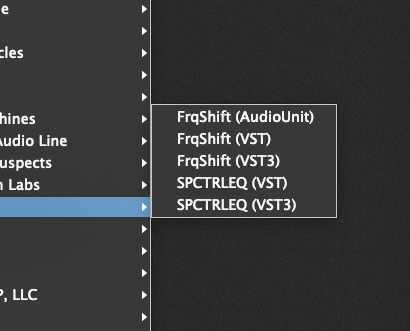