Introducing myself: Starting my journey with Gig Performer

finally, I’m a happy new registered user of Gig Performer now, after being on stage with Brainspawn Forte for the last 17 years.

Currently I’m taking my time during the lockdown to crossmorph all my sounds from the old Forte laptop to the new one with Gig Performer. I’m playing keyboards in a semi-pro rock and metal cover band, with a slight bias to Rammstein, usually playing ~45 songs per show, 10-20 shows per year. For each song I need completely different and rather complex mappings of sounds and samples to my keyboards. With Forte I used Bomes MIDI Translator Pro as additional software (and complexity) to realize smooth switching of MIDI channels and sounds during one song. With Gig Perfomer, I’m using variations and widges, now.

I started with the three four most complex songs, and I have to say, after a little learning curve, I can realize everything with Gig Perfomer after only a couple of days, what I was able to do with Forte after years of experience, only. And even more like smooth transitions between songs with persistence on.

My main instruments are Spectrasonics Omnisphere 2, NI Kontakt 6 and Steinberg HalionSonic3, together with 4Front TruePianos. In almost every song, I have a combination of some of them.

My key rig consists of a Korg Wavestation (*1992), now used as a master keyboard only, and a Roland Edirol PCR-300 controller keyboard on top. I have two of each, one rig for the home studio, and one rig for band rehearsal and tour. Sound interface is a RME Babyface Pro running at 96 samples @ 44,1kHz. More on latency and jitter later

For monitoring I love my Sennheiser HD650 phones, with some EQing in the Babyface.
My new laptop is a Clevo PB51DDS i7-10875 32GB RAM 2x 1TB SSD gaming machine, needing some tweaks and testing for good audio performance at very low fan noise.

Perhaps I will have many questions and also some ideas on Gig Performer, so I’m looking forward for many exciting discussions on this excellent forum. 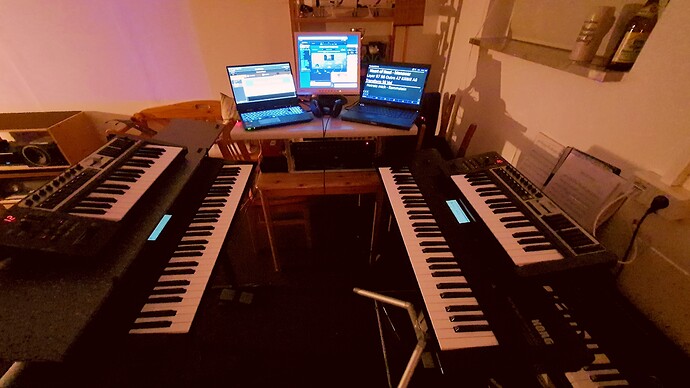 Welcome to the show. Glad to have you.

Hi @Angel and welcome to the GP world!

Nice rig! seems in the right direction with GP

Hi @Angel, nice to see you adopting GP for your keyboards rig.

HI @Angel welcome to the Family

Usually the better performance of a processor results in more ventilation, but given your PC’s processor, even if you lower the fan speed, the performance will still be more than adequate.

Thank you very much!
Actually, I’m familiiar with these DAW tweaks since I have preppared three and now my 4th laptop for live audio performance within the last almost 20 years.
Most important tweaks, for my current laptop, which I found out by testing to avoid clicks and pops with GP3, 2x Omnisphere + Kontakt 6 +HalioSonic3, each heavily loaded with sounds and samples and disk streaming, and switching rackspaces or songs with audio persistence is on, predictive loading is off:

You’re right, using only one CPU core by Omnisphere in GP, (Kontakt and HalionSonic plug-ins set to use 4 cores, each), GP can’t really generate much heat on the CPU

It’s more the parasitic scheduled apps like updaters, virus scanners etc. that cause short periods of very high CPU load and fan noise. Still have not found all options to switch them off in Win10.

The original EC BIOS of the Clevo laptop has a very aggressive fan cooling strategy for this kind of gaming machines, somewhat tamed by the XMG/Schenker BIOS version. With a dedicated fan control software the laptop now is almost totally quiet, CPU <65°C, even with heavily playing notes … nice!

This is an interesting one.

According to my tests with Gig Performer this setting didn’t make any difference:

Did you perhaps perform any tests on these two settings?

Good question. I would need to ckeck, it’s not obvious. It seemed to help not directly on avoiding clicks at high CPU load in Gig Performance at very low audio driver latency, but avoided some clicks when other things are going on like page scrolling in PDF manuals while playing.
Maybe an urban myth … but one of the oldest for Window DAWs.
At least without side effects so I keep it.

According to my tests with Gig Performer this setting didn’t make any difference:

Yeah, that makes sense — that “adjust for best performance” is just around scheduling to make GUIs seem more responsive. But all the important action in our system happens in a real-time audio thread so those choices wouldn’t be relevant.