Your audio buffer settings are more than adequate. I’m a Mac user. Maybe some Windows users can offer advice.

Even when I replace the B-3X plugin with the Arturia V Collection B3 (which is MUCH lighter), I’m still glitching, although the CPU at rest is now at 40% rather than 70%. Still seems high considering I’m only using two output plugins.

Can you just remove Sampletank for a moment and see what the CPU is without it?

GP’s CPU meter drops to ~ 25% when I remove the SampleTank 4 plugin from the rack.

SampleTank running stand-alone (outside of GP) with all 16 instrument slots loaded consumes about 20% of my computer’s CPU when idle and about 27% when I am playing.

Since the SampleTank and B-3X plugins are so heavy, looks like I need to go back to creating more rackspaces, which will increase load time and memory utilization. As I’ve stated in other posts, my band doesn’t work off a setlist so I need to be able to call up any song at a moment’s notice. For that reason, predictive loading doesn’t help me to manage load time and memory. Oh well…

First of all, Gig Performer is showing only the CPU cycles used by the audio processing. That’s completely different from overall CPU usage which you would see using the Windows Task Manager (say)

Secondly, SampleTank is consuming an absurd amount of CPU cycles even when no audio is being produced. A well-behaved plugin should barely have any “audio processing” CPU activity when there’s no audio being produced.

Agreed. The IK plugins are resource hogs, but they sound great!!

To compare, I created a new rackspace using only Arturia plugins from V Collection 7. This setup, which lets me switch between acoustic piano, Rhodes, Wurly and Clavinet on the bottom controller along with B3 on the top controller, uses under 20% at rest and under 60% when playing with everything active. No glitching whatsoever. When I use “bypass” widgets to select only one of the pianos, as I normally would within a variation, the numbers drop to 6% and 20%. 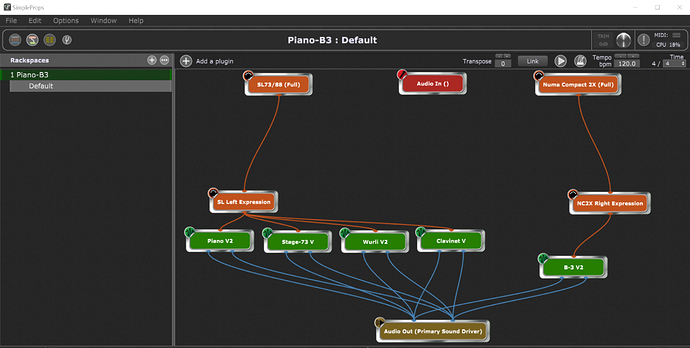 The IK plugins are the issue, I believe. I already submitted a ticket for the B-3X resource issue on the IK forums. Have not done so for SampleTank 4, although it’s not bad when you only have one or two instruments loaded.

The IK plugins are resource hogs, but they sound great!!

Yes, but those aren’t mutually exclusive.

I have tried both ST3 and ST4 on a Mac and have found them to be so CPU intensive that I just won’t use them in a live situation. If there was a sound I really wanted, I would just sample it and throw it into Kontakt.

Through trial and error, I am finding that ST4 is usable as long as I don’t load more than two instruments per instance. In rackspaces where I need multiple ST4 instruments, I create separate plugins and bypass those not required for a particular variation using widgets (switches). Same for the B-3X; I bypass when not using it and the CPU goes way down. Not the best option, but it works.

Make sure you have the latest version of sample tank, the original was unusable in my setup, the updated version is ok

Thanks, davepine. I have 4.0.8, which was purchased just last month. 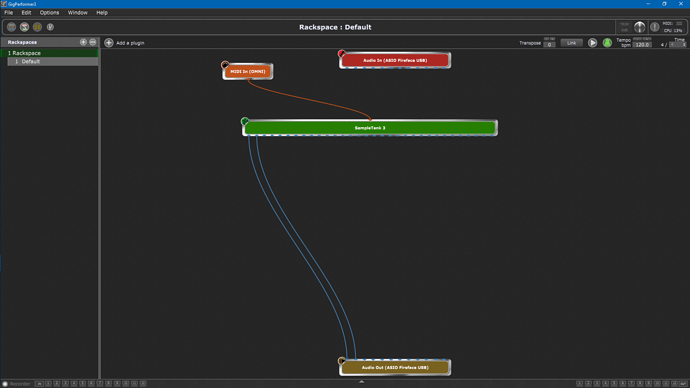 My ST3 is only using 13 percent with a Grand Piano vst3 loaded.

Yeah, I get a similar result now loading just one instrument at a time. Initially, I was trying to create one mega rackspace with ST4 loaded up with 12 instruments, but just way too resource intensive (particularly with IK’s B-3X plugin as well).

Just for comparison: Kontakt with The Grandeur 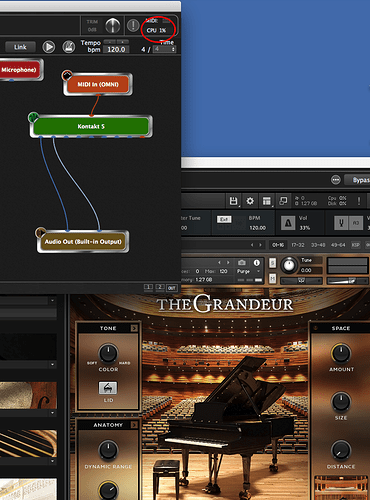 (If I play some chords, CPU goes all the way up to 4%)
This is on a seven year old Mac using only the internal sound card.

I believe the lesson learned here is that audio processing load is directly related to the number of active plugins/instruments, and possibly at an exponential rate. I also see between 4-12% with only one plugin active. When I had ST4 loaded with 12 instruments and B-3X (which is very heavy), it was trying to process audio for 13 plugins simultaneously, which exceeded GP’s or my audio interface’s capacity.

There are also obvious differences between Windows and Mac to consider, with the Mac having a clear advantage in audio processing in my opinion.

I was going to suggest trying Kontakt as an alternative to Sampletank, it is very light on resources.
You might like to see the thread on here regarding the B3x, I have found it to be next to unusable, but found the Arturia B3v to be rather feeble by comparison (or at least their Leslie), so I found a compromise by using it with IK’s Amplitube Leslie emulation. It still hogs the CPU somewhat, but a lot less than the B3x. Their distortion stomp boxes also work well in it.

While there are certainly some differences between Windows and Mac (the audio interface drivers have some impact of course), I think the important thing to understand is that there can be orders of magnitude differences in the quality of plugin implementation.

For example, here’s a screen shot with four instances of Kontakt, each of which has 10 instruments loaded. The resting CPU (audio processing portion) is still only about 6%

When I set them all to OMNI mode and play a four note chord, causing 40 instruments to sound, the CPU went to about 50%, again on an old Mac with just the built in audio card. (44.1k and 256 buffer size) 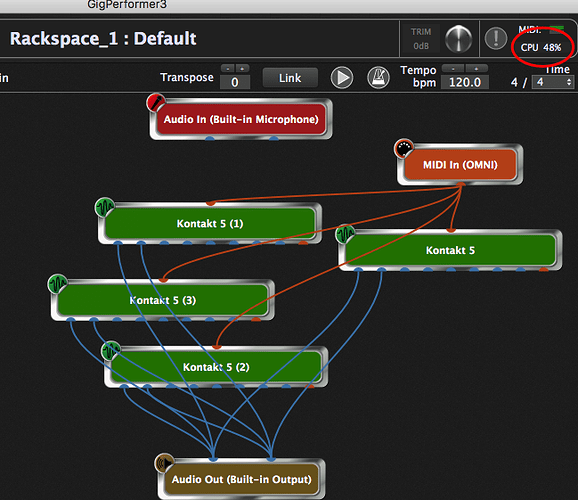 @dhj Why are you using multiple instances of Kontakt?
You can run them all within a single multi assigned to different MIDI channels.
This should lower the overhead considerably.