Hi. Im looking for a real time harmoniser plug in for vocals that i can use within gig performer. I want it to be able to read midi notes from the keyboard and automatically create vocal harmonies using onboard presets. Ideally a minimum of 3 part harmony.
Any suggestions?

Never found one that can tranform my own voice into something else than Alvin and the Chipmunks.

EDIT: I probably should have read ALL of your post before answering. My response is probably not relavent. The plugin has both audio and MIDI input ports. Not sure what the MIDI port does. I’d have to read the manual. I’ve never used it.

Take a look at Eventide’s H910/dual H910 Harmonizer. It’s currently on sale for $69, down form $249. There’s a free demo available. Note that it uses iLok. I’ve had zero problems with soft licensing (to my laptop) via the iLok Plugin Manager. I refuse to use a dongle. They’re unreliable and consume a valuable USB port. And especially developed for David-san, there’s a vocal preset called…wait for it…Chipmunks. [drum roll] 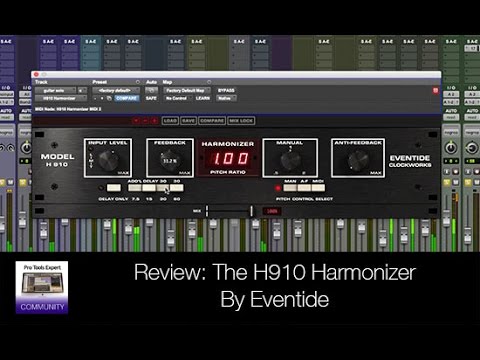 You might want to take a look at PluginGuru’s Unify VST and build your own harmonizer in it. There are plugins that will create MIDI chords from a single input MIDI note if you won’t be supplying the harmony directly. Scaler 2, Cthulhu, Captain Plugins Play Epic, Ripchord; there are others. There are a lot of good choir libraries out there, too.

And especially developed for David-san

Not sure about that, but from what I have heard here and there, If you don’t have an easy control of the “formants”, no chance to get more out of your vocals than the… Chipmunks or Darth Vader

The new Waves Harmonizer plugin is about the best thing that I’ve found. It’s not perfect by any means, but it’s similar to the TC Helicon Voicelive box that I used several years ago. Whatever you play on your midi keyboard is your harmony. Problem is that I spend way too much time doing “Seven Bridges Road” cause it’s just way too much fun.

Ive got a fully working demo version. I gave it a try for about 30 mins and its looking promising. The thing it doesnt seem to do, which TC Helicon Perform VK does is follow the melody in harmony. It just plays the chord from the midi notes you input, whereas the Perform VK guesses intelligently from the MIDI input and creates harmony melodies. Ill have some more time with it tomorrow and see how it goes. Its on special offer at the moment as well.

Some people wanted to know about Waves Harmony.
It works fine within GP. Its actually quite good and flexible. There are two different modes: one where it follows midi notes from a keyboard, and the other where you input the songs key, and it auto generates harmonies, or you can specify. It gets a little unrealustic the higher up you go from your natural voice, but its perfectly useable to generate harmonies in approx your own vocal range, especially backing vocals in a live situation. I will be giving it a try on a few songs at tomorrow’s gig.
Btw, Waves does not offer support for use within GP.

Btw, Waves does not offer support for use within GP.