GP in the studio vs. creative uses / vs.: how many HW controls is too much?

Hello fellow Musicians,
so @npudar asked me to make a post vs. my setup, plus some comments to it, since i once posted a shot in the depth of a thread, and he saw that foto and was triggered…

here is foto 1.
This is my old setup. and it represents the minimal setup i would like to have,
but “somehow”, at the same time,(in theory) also my maximum setup i would want to deal with.
Point here: the two Novation Launch controls XL ( LCXL) 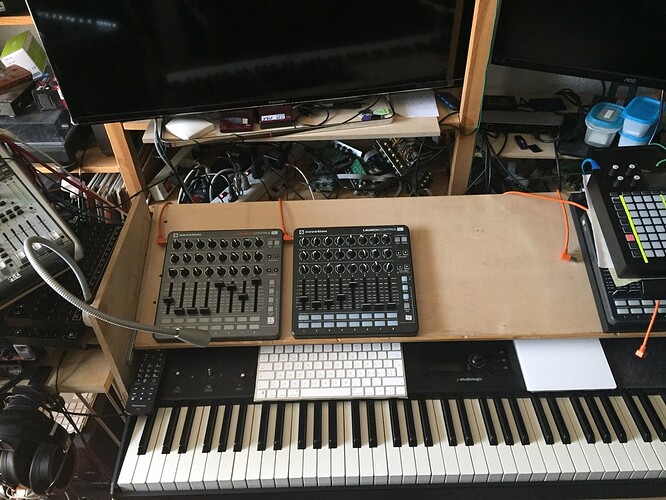 point was: originally, i just had one LCXL,
But when i switched over to GP did i quickly had the urge to separate the "FX/“soundmaking controls”, and the “instrument mixing” controls. So, i added another LCXL.

Foto2:
thats where things quickly went, assoon i had my M1mac (more CPU power): so, now with 3x LCXL. Why ?

then, a few months back, i added even more controls.
Now, yes, do we reach the level of too much, in my humble opinion.
Foto 3, this is now my actual setup: 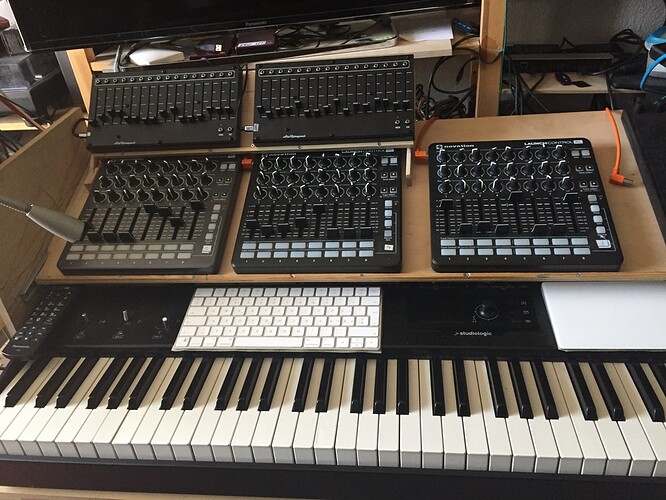 so, why adding even more controls ?
beside other things, i wanted to have more faders, and more options to spread out specific controls to “own places” / also would i want to deal with 2 instances of GP, or even 3.
it gives me the options at hand, to spread out HW CC controls of GP instance 2 or 3, to very own places.

i just started to begin to use these two 16 faders CC faderbanks ( ATO n16 / DIY project, sold at thonk.couk ) I´ve not utilised these over months, i really just had first to wrap my head around all this.
one usecase is now for example: to put drums, uTonic, on one faderbank.
another fresh one is, to take my “single note Delay” patches out of my main gigs/Racks, put it on a own GP instance, and put the HW controls on the left ATo faderbank.

So, all in all,
this, “tooo many controls”, is here to help me to keep things clean and less confusing,
versus creating even more confusion, based on having too many HW controls.

Additional fotos:
the whole thing, other views. Not meant as posing but for your information

Since i achived -for my taste- with this setup a better “hands-on access” than with any hardware synth possible.*
To notes: *on this, is the mac Qwrty AND trackpad placement just a major factor ! its the keyelement for me, to make me feel so, as just expressed. 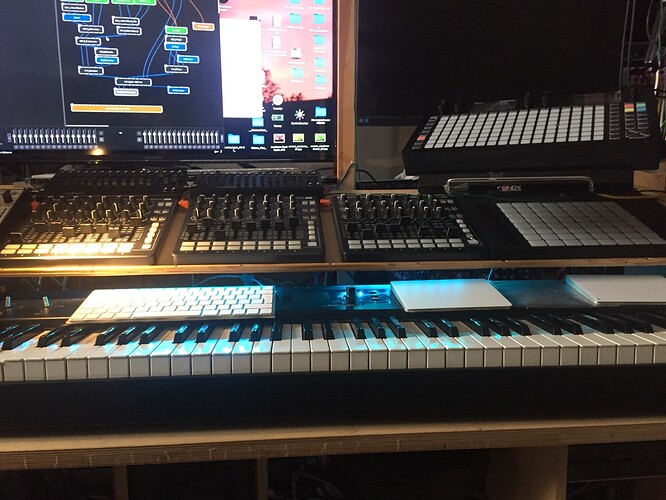 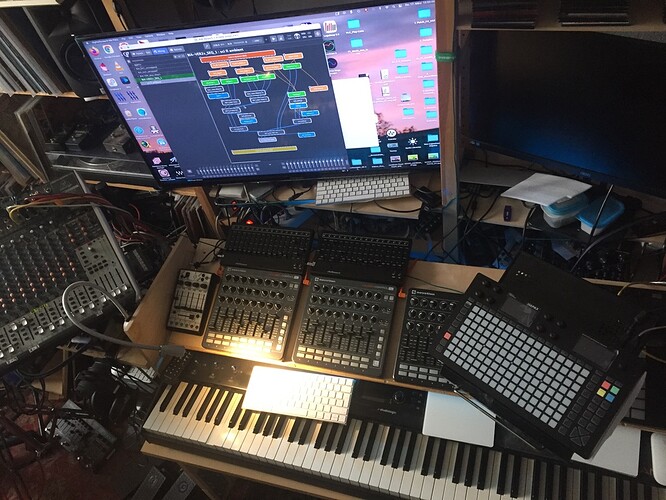 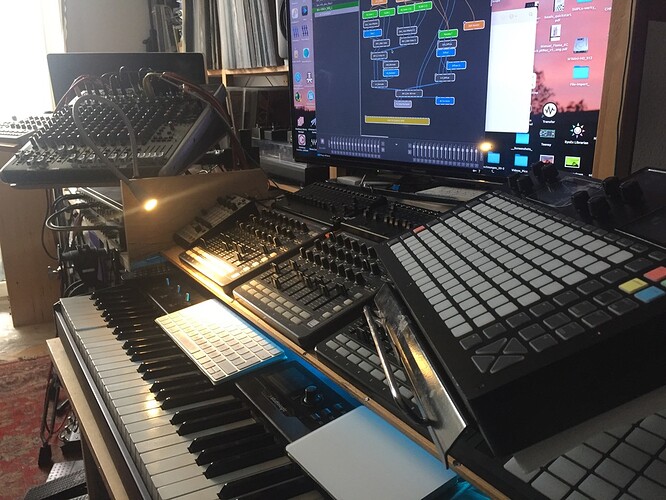 the sequenzer with the many small pads is the qquite new Hapax.
i use it sometimes as a midi looper for piano ( long time not used)( works great on that)

Edit: the mixer on the left is my submixer.
it handles everything ITB, sometimes some grooveboxes or Bassguitar, and gives me the routing options into the PC, or out of it, or roundtrip recording ( out back-in ).
i go with two audio interfaces to the mixer. one just stereo, one 2x stereo ( GP)
i use a M1macmini btw.

additional:
a usual rackspace of mine that has evolved to some point has around 40-60 “parameters” mapped to widgets. Thats then all just on my first two LCXLs, and is placed in ONE 3U frontrack panel

here is an example / screenshot.

i guess, you folks would NOT want to deal with that mess

But hats how things work best for me ( use as little time as possible on making these frontpanels ! since everything is permenently evolving and changing ).

all these here visible controls are just on my main two LCXLs ! as is in foto one.
the other HW controllers were for example completely unused.

to notes: my keyboardtable was NOT built to place there any midi HW controllers.
it was originally meant for HW FX like stompboxes and modular racks, plus a groovebox or two. they all had to move or go. Plus originally was it built (DIY) when i had a korg Kronos on it, and even NO music PC was in place or even in sight, lol.
I rate the value with these midi controllers “for me”, now dealing with GP4, higher than having other things there.
my whole music making setup, beside my big modularsynth setup that i still have, is now GP centered.

personally i can say:
i achived with this setup ,-for my taste-, a better “hands on access” than with real hardware synthesizers.
My setup is more and better jammable ( knob wiggling while playing the keys) than with real synths !
and the whole Synthesizer dudes scene i´m confrontated with in other forums, especially the german ones, do denie this very possibility.

In hardware vs. software discussions (vs synths) is the “hands-on access” a ever and ever repeated argument, => pro hardware ! my setup tells me other.

To notes: i have been a hardware only guy ! i made music over the course of ten years without any computer, and mostly: i am originally a computer hater !
so, there you have it

Thank you very much for sharing!
Ich danke Dir!

here is my first video attempt.

its a preliminary 20sec cut of a litte bit longer performance. hosted at vimeo.
i will try to make several videos, which will go at YT. in winter or so.

its a “dry vs. wet” audio path recording. (my point)
(the passage is 20sec, shown as dry rec, then the original wet Rec)
The audio i listened to while playing was the wet path.
which is the point of such a performance or jam.

i want to showcase the “realtime sounddesign” capabilitys we have at hand nowadays.
GigPerformer beeing a big part of it. Its GP which has opened doors to me.

i would claim, the answer was allready posted

its a preliminary 20sec cut of a litte bit longer performance. hosted at vimeo.
i will try to make several videos, which will go at YT. in winter or so.

@pianopaul, i´m sorry, this video was a sponatenous re-edit of something i have in work,
reason to do so and to post “this” now, was a ongoing discussion in the general gear subforum of the otherwise modularsynth related “modwiggler” forum.
some folks made in quite unpleasant form clear that NOTHING comes close to a guitar —> when its up to ----> “expressivity”

For YT, i need first to create a specific account !
i´m not yet there…

would claim, the answer was allready posted

Ok, you are a friend of abbreviations,right?

Ok, you are a friend of abbreviations,right?

Reminds me to a guy who said
„I am atheist, thank god!“

Reminds me to a guy who said
„I am atheist, thank god!“

I have a pastor friend of mine who likes to say that he is a nudist, but not a practising one…