I’m setting up a bussing situation that should not result in a feedback loop, but does. I’m including a picture that should illustrate it clearly, but to explain:

What happens instead: If the plugin (decapitator) is unbypassed, an absolutely atrocious feedback loop starts that will not stop until both the plugin is bypassed AND any audio cable is momentarily disconnected. So audio is momentarily being passed somewhere it shouldn’t.

Here’s a rackspace demonstrating the issue. Substitute in your own plugin of choice, presumably it should still happen.
feedback_bug_demo.rackspace (35.5 KB) 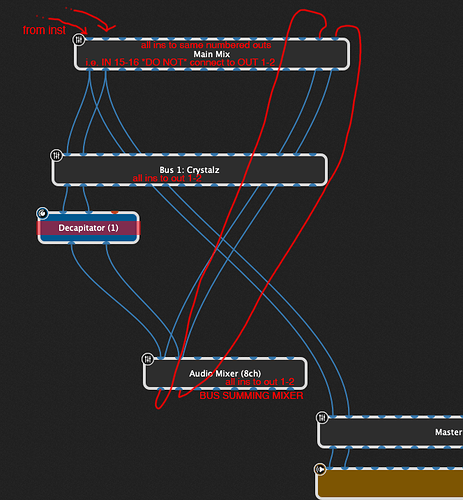 I can, of course, work around this by just using another mixer to sum in the bus signal, but this still should not be happening, right?

If you setup a cycle like that, where you are feeding output right back to inputs, you’re absolutely going to get feedback.

@mechanica
I can’t get the sense of your routing, because IN 15 16 of mixer main mix are routed to out 15 16, which are not connected elsewhere.
And because of this there should be no feedback.
I also could not reproduce this.

Thanks for responding, but please look again more closely at what I wrote. The output never feeds back into itself.

This is an example stripped down to the simplest version of the problem. In production OUT 15-16 would route to a physical output. But you are correct, currently they are connected to nothing, so there absolutely should be no feedback. Thank you for understanding what I’m talking about though.

Weird that you can’t reproduce it. What plugin did you use?

The output never feeds back into itself.

I see where you’re getting confused. Yes, I redrew them in red because if you don’t look closely at the picture, the cables are confusing. It would be helpful if there were some cable management options, like joints. (There aren’t, are there?) But OUT 15-16 of “Main Mix” are not connected to anything.

The reason everyone is confused and the wires look strange is because although you’re using different channels - you’re feeding back a signal from one plugin to another and back into the same plugin again. This is something that will simply not work.

We did have a user wanting to deliberately create a feedback loop and the way to do that is to route the signal to the global rackspace and back to the same plugin again.

I am absolutely NOT feeding back the signal into the same plugin. Download and open the file. OUT 15-16 are NOT CONNECTED to anything. IN 15-16 go to OUT 15-16. The only thing entering the plugin is OUT 1-2 of “Main Mix”.
I have explained this very clearly. Download the file and just look at it. I’m not stupid.

I am absolutely NOT feeding back the signal into the same plugin.

Never suggested you were - not sure where is this coming from.

I can only repeat my original statement in which I have not talked about the channels you used. This is digital, not analog domain and things work a little differently.

feeding back a signal from one plugin to another and back into the same plugin again. This is something that will simply not work.

… regardless of the channels you use.

So these do nothing: 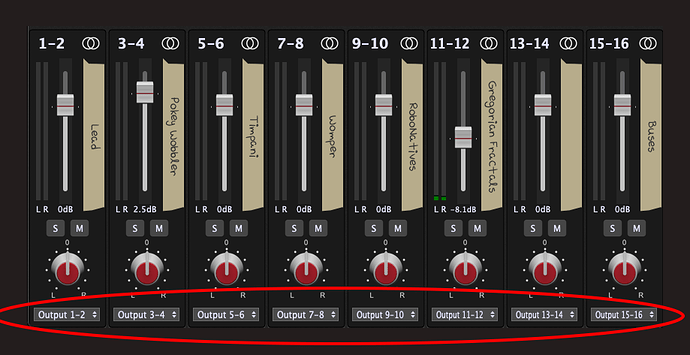 I invite you to elaborate: this being the digital domain, signal is routing to places you never sent it? The digital console software for my interface and every DAW I’ve ever used does a pretty good job of putting signal where I tell it to go. So GP is failing here if it cannot reliably send your signal where you route it.

So these do nothing:

Why do you say that? If this was said sarcastically for some reason - I really don’t appreciate it. Please be courteous in these forums.

You cannot do things in other DAWs that you can in GP. You can’t simply feed back a signal from some channel pair of one plugin onto another one and back into the first one on another channel without using an AUX bus. Do you agree with that?

I pretty much said the same and the way to do it if you really, really want to, is to use the global rackspace.

Unfortunately this is a subject too complicated to simply explain in a few sentences.

It should suffice when I say that you cannot do Plugin1 → Plugin2 → Plugin1 regardless of the channel you use. You can’t do this is any software product. The only way you can is to use an intermediate processing “device” like an AUX bus or a global rackspace in GP.

You’d be surprised what I can understand with a brief explanation, but fine.
The take away is, Audio Mixer plugins offer the illusion of channels.