Better have this a own Tips topic, rather than just a post in one of the “blogs” threads:
edit:
in post #3 is a Gig file of sayed dual crossfade, for your evaluation purposes.
in post #4 is a test gig file with a quad switch, incl. all bypassing widgets of unused FX blocks.
these are for evaluation porposes to show you the idea, and how you can take out alots of advantages by working with individual curvatures vs. dealing with widgets.

here is a Tip from me
( see then below: my screenshots vs. the curvature of the used widgets)
To save CPU I came up with a trick:
cross fade between two instruments, but with included bypass at both ends of the knob travel
Main scenario in my case: I use a Piano and a E-Piano as a instrument source for quasi any of my rackspaces. Mostly, I would use one OR the other. Just in rare occasions would I effectively mix the audio of the two.
So, I create a cross fade using two grouped widgets. These two do control the Gain of a 4 channel mixer(2x stereo) in opposite to each other ( => invert one widgets value)

Now, we can enhance on this, using two more widgets ( I take knobs for this too / I had problems with buttons), add these widgets to the same group, map these two widgets to the “Bypass” of each of the two instruments you want to cross-fade.

The trick now is to tailor the curvature accordingly => on all four widgets !

First, the screenshot of one gain curvature:
point is the plateau to value: zero on the right side !
its contrary widget would have the plateau on the left side
( i.e.: just use the inverse button / plus: save curvature …and load, first)
with two widgets, and that curvature can you create a sober cross fade between two instruments ( or FX for example), but if only one instrument is used, is the other set to be bypassed. point here: you have NO audio clicks for sure !
You engage the bypass, just when the gain is already set to zero.
( not sure if GP4 would even prevent here from clicks automatically on its own vs. bypass a plugin actions ? ) 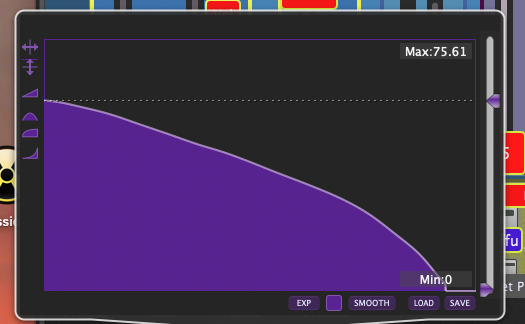 this is the curvature widget to engage the bypass: 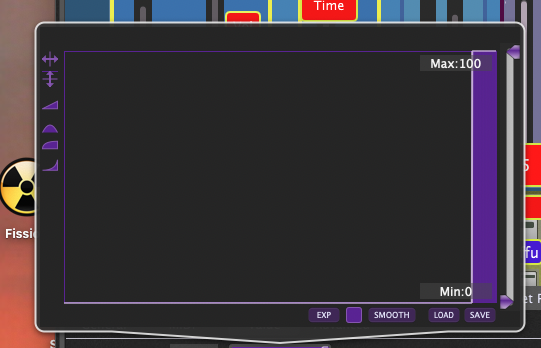 you can enhance this concept, …I´ve done that,…and create for example a 4 plugin switch, including the whole plugin bypass functionality, …including small fade-in/out ramps, so that the audio is never hard switched on-off, but slightly faded in and faded out when switching.
it takes then 8 widgets.
Well, I think i used a audio fade on the input and the output ( since I was doing this with FX plugins), which makes then for a total of 12 grouped widgets. ( for gain control, the mixers are indeed your friend).

just think about, where do you have a “A OR B” situation ?
using widgets extensively is your friend

( and so is my mess on the front panels

Got an example gig that we can download?.
Cheers

my appologies, it was a very spontaneous post.
But i created now a Gig file to upload.
the frontrack is just how i use it ( with everything else removed) / so, nothing sober.
But will give you access to the curvatures, to check.

hope this works.
edit: strange enough i run into problems, checking that gig file.
personally i work without using the grouping sheme, and would just map each widget one by one to its specific HW control. Same control in this case

i use Pianoteq as the instrument. replace it as you like.
the purpose is to post this for your evaluation purposes.
To notes: the 4 widgets: “channel mutes” are not needed, this is a remain of my original patch. i probaly took the wrong rackspace, in later racks was this widget group set to control a audio crossfade i´d guess.
its really all meant for evaluation purposes to give you the idea

the FX block is 4x the chow matrix delay. this is freeware. link below.
its patched in mono to keep the widget work simple ( since it uses own parameters for L and R channel / it was the only freeware FX i have )

in this rack, you can switch between 4 FX blocks,
in this particular case between instances of the same delay,
It has added bypassing of the unused FX blocks as a main part of the game.
attention: plus all FX blocks are bypassed when the HW control is full CCW ( just made by the FX blocks #1, bypass curvature )

to make the patch somehow “useful” are the widget values setup differently.
here you can test a “Mickymouse” piano patch ! and check how different ranges work differently. You can achive different mickymouse-piano sounds.
Delay block 3 and 4 have same ranges, BUT different curvature on the DLY-time to show how you can create different behaves with using curvatures.
=> map to a fader, in case you want to test

to notes: i had to remove the group setting for the 4 delay time parameters / i run into problems with the parameter mapping otherwise / you might want to set the Group yourself.

scroll down to find the chow matrix delay
https://chowdsp.com/products.html

also to notes:
when setting up curvature values for such a patch,
REALLY check the endpoints of the curvature !!!
ie, value = zero and value 100%.
there can be unvisible gaps ! not closing it fully ( especially unvisible on the 100% side of a setting )

Edit: another thing to notes:
the mute switches on the mixer are needed when doing such a four plugin switching with FX plugins, incl. bypass, since the bypassed plugin block would just straight forward its incoming audio signal to the output. Hence chanel muting post the FX plugin IS required.

Thanks-gonna check it out over week. Cheers