Hi, I am interested in how you set up synth plug ins and effects plugins, given that the audio mixers do not have effects bus and sends.

I am not so educated in this and would appreciate a screen shot or description on how you have solved it. Of course, I can just connect them in serial Synth-Reverb-Chorus-Mixer/Output. But I Think it is more flexible to have a bus-approach.

Why do you think a bus approach would be more flexible? In my opinion it’s one of GPs biggest strengths to see all the effect chains and any audio signal can be routed into every single effect instead of having different buses for that.

Take a look at this first screen shot. 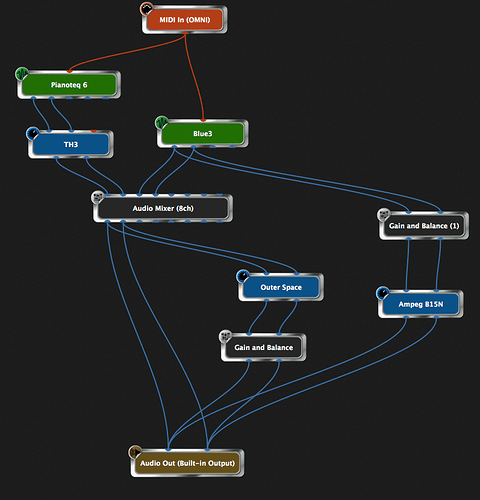 We have a single MidiIn from a keyboard (say), controlling an acoustic piano (Pianoteq) and a hammond organ (Blue3). The acoustic piano is going into directly an effects plugin (TH3) and the output of that goes into an audio mixer.

The hammond organ is just going directly into another two channels of the audio mixer. Internally, both are being mixed to the first stereo output pair.

That first stereo output pair is connected directly to the output but it is also connected to a reverb effects plugin (Outer space) which has a single gain right after it to control the amount of total reverb from the Piano/Effects and the Hammond organ.

Separately, the hammond organ is connected to an Ampeg distortion plugin and that input volume is controlled separately and independently of the main Audio Mixer (so think pre-fader if you want) and so some organ distortion goes to main output, regardless of how much clean organ there.

Now take a look at this second screen shot 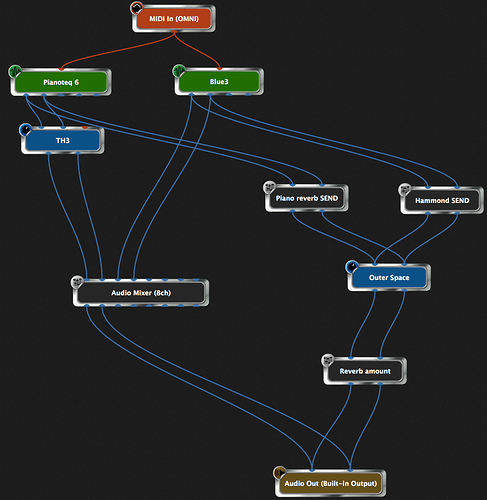 screenshot_3843.png828×850 151 KB
In this example, we still have the piano going through its own effects to the main mix along with the hammond organ.

But now we also have the piano before its own effects (basically a tap) and the organ each going to (what would be called “SENDS” in old fashioned channel strip approach) to control their contribution to a global reverb (Outer Space) and then you can control the total amount of reverb going to main output.

The point of course is that you can route anything to anything and you don’t have to set up channel strips, create inserts, sends or aux busses to do it and of course you can easily see how things are connected.

Hi @beethree did you try out what dhj said? For me, that worked out well while working on something similar.

Hi, thanks, I’ve tried this and variations of it, and indeed it works great and the flexibility really is greater without buses and iserts, I get that. Thanks for your effort.