I plant to use it with NI Vintage organs. I would want to use the sustain pedal for sustain (I know, sacrilege!) and mod (in my case, a button!) for Leslie fast/slow.

How have people handled controlling the Amplitube Leslie rotary speed in GP? (I know there are a lot of complaints that, within Amplitube Leslie it is not user friendly has to be separately done for each preset).

I saw your questions about this on KVR but I don’t know enough about that plugin to be able to answer.

Thanks, David, we’ll see if anyone else has dealt with this.

Because the Leslie speed is a parameter inside the Cab section of Amplitube, you’ll have to map the Speed setting of each Leslie cab you want to use to its own Automation parameter, and then map widgets to those parameters. 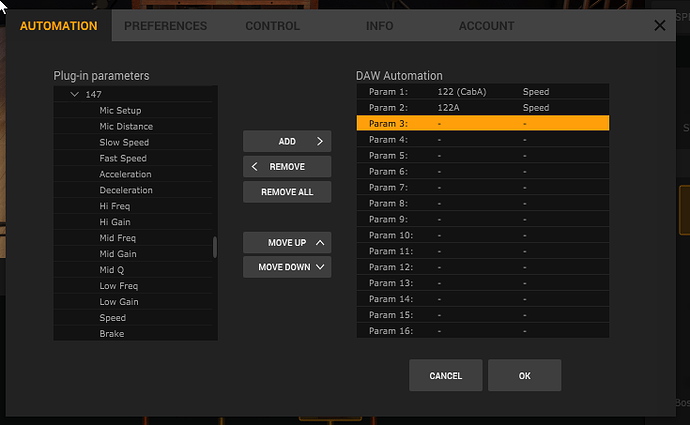 Another reason to use the T-Rack version instead.

So, I would only need to map each cab once? (I would still have to connect a widget in each rackspace).

Am I making sense.

Yes but work noting that gain and volume behave the same way in IK where a 147, 122, 145 etc all have unique gain mappings.

Speed is a ‘global’ parameter though.

Speed is a ‘global’ parameter though.

In T-racks, yes. In Amplitube, no.

In your particular circumstance, I would probably use variations instead of separate rackspaces. I’d connect a MIDI IN(Local GP Port) block to Amplitube, and map a widget to PC of that block. Then I’d set my presets up to respond to PC messages inside Amplitube. That way, you can set up the Speed parameter once for each cab and change presets by changing variations, thereby keeping the Speed parameter ‘global’.

It’s not the preferred way to change presets in GP, but it would work for your purposes.

I think I understand. Thank you. (I have read some other discussions of this.)

It sounds like in Amplitube I should create a template preset with the speed parameter mapped (I guess one template preset for each cab, although I may only end up using 122).

Then if I use always use the template preset as a starting point, at least that part should be done(?)/

Sure, you could save it as a Favorite and recall it. The mapping inside Amplitube should remain.

Another reason to use the T-Rack version instead.

Before I bought the T-Racks version I contacted NI and they told me the Leslie code is the same in Amplitube and T-Racks, but the T-Racks is more appropriate for a use as a “standalone” plugin. They seemed to be right.

Before I bought the T-Racks version I contacted NI and they told me the Leslie code is the same in Amplitube and T-Racks, but the T-Racks is more appropriate for a use as a “standalone” plugin. They seemed to be right.

Good to know! I just purchased amplitube leslie, and the one thing I’m not sure I like — is the “tail” of sound when the leslie is switched from fast to slow. I know the acceleration and deceleration are customizable… but it doesn’t seem to play many “swoosh swooshes” when going from fast to slow. But maybe that is characteristic of a real leslie (which I have never played).

a real leslie speed is somewhat variable and depends on model and can be adjusted in a limited way but tends to be around 400 rpm for vibrato/fast and ~50 rpm for choral/slow, sometimes the low end speaker baffle runs a bit slower than the upper horn driver on both settings.

Getting a believable fast and slow speed is helpful to making a Leslie simulation sound believeable.