Can I use GP3 together with a monitor and FOH system?

Hi.
I have a setup consisting of an Allen & Heath SQ5 desk acting as monitor desk: running in ear for the band, using tie lines to split the raw in out to waves emotion LV1 software desk for FOH. I run it at 48kHz sample rate.

What I’d like to do is run a number of channels through Gig Performer, incl some guitar and bass rigs.
Can it be done, with latency low enough for any practical use, for in ear monitoring?

I also want to be able to send the channels that run through Gig performer sounds/plugins in the SQ desk to waves LV1 desk.

I fear that I won’t get low enough latency, I will have problems with unaligned channels, phase issues etc.

Anyone have experience from doing something similar to this?

Welcome to the forum!

GigPerformer is absolutely capable of that and in fact is perfect for it as it’s super easy to set up all the mixes.

For latency, that is down to the interface and any plugins - Gig Performer won’t add any additional latency on. However, if you are planning a mix of channels through GigPerformer and straight analogue for your in ear mix you’ll end up with phasing issues; that is no fault of GigPerformer though and is just nature of the beast with multiple decoding/encoding stages. I would recommend that all channels are sent through GP for the IEM mix so they are all aligned, or that the signals you want to process in GigPerformer are sent digitally to GigPerformer which would cut down on a decode/encode/decode stage.

Thank you for the insight.

Will GP3 align all channels that’s in use?
I’m thinking a simpler way would be to simply put a GP3 on each output and things will be aligned from that, is that correct?

Is there a way to se how much latency a rack/plugin adds?

Maybe I’m confused here, but can you please explain more with the digital part to lower latency?

For example. I get my input into the pre amps of the desk, there you A/D it, after that I guess that GP3 take it’s feed of the signal. Am I right? And after all processing it’s sent back to the channel again, or is it straight to any output of the interface?

I’ve only had the chance to try it out at home with my small home interface.

Will GP3 align all channels that’s in use?

I’m thinking a simpler way would be to simply put a GP3 on each output and things will be aligned from that, is that correct?

Not sure I 100% understand this question - are you talking about using multiple instances of GP3 for each IEM mix? (which, if so, will work great)

Maybe I’m confused here, but can you please explain more with the digital part to lower latency?

For example. I get my input into the pre amps of the desk, there you A/D it, after that I guess that GP3 take it’s feed of the signal. Am I right? And after all processing it’s sent back to the channel again, or is it straight to any output of the interface?

The main chunk of latency when using digital stuff is from the A/D conversion. Every step of A>D or D>A adds conversion in as teh interface must buffer some of the audio to allow the output to remain glitch free. So having less stages of A/D is better.

After reading your question again, I may have misunderstood the setup you want to run. Do you want to run GP3 as an ‘insert’ on some of the desk channels? Or do you want to use GP3 for processing the instruments before sending to the desk?

Thank you for the information!

Yes, I thinking to use a dedicated rack for each IEM out would apply the over all align and also align unprocessed channels.
Once again the latency might be an issue if not on the interface part, then on the plugin part.

Do you know if there’s a latency chart for the PA plugins?
It would really make things easier to cut out the ones adding to much for live use.
That’s also why I wonder if there’s a way to see latency per rack/channel, so if I add a plugin I can directly see latency added is acceptable or not.

I’m thinking about different options, if I simply use my SQ desk, GP3 won’t do any ADDA conversion since I will only use the USB for communications between desk and host/GP3. Not sure where in the chain the feed to GP3 is taken by default.

Running as an insert is my second option, but I hope I can avoid it.
The feed to my LV1 would to be changed from tie lines to direct out post insert, which I wish to avoid if possible.

Regarding latency: Do you use a DAW like Ableton Live or Logic?
There you can see the introduced latency

The best way to answer some of these questions will be to measure round trip latencies yourself. Gig Performer will do this for you. You just have to use a patch cable to connect one of your SQ5’s analog outputs back to an analog input. In Gig Performer, this function is under “Windows->Measure device latency” and it will bring up the window below. 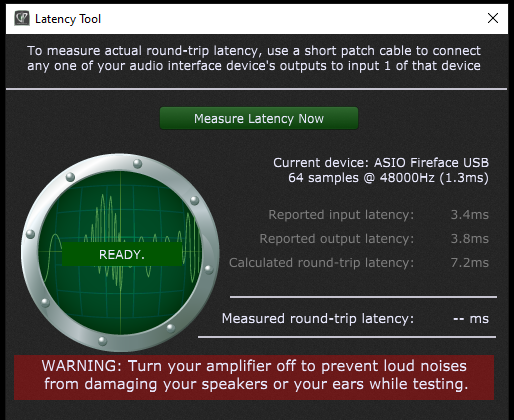 This is going to measure the base latency of getting audio through the SQ-5’s A/D converter, any internal processing it does, over USB to your computer, through GP, back out the USB, through whatever the SQ5 does to that, and back out the SQ5’s D/A converter.

To get a correct measurement you have to make sure the SQ5 is set up so that the output channel you use (let’s use channel 8) is NOT picking up the input of channel 1, and is ONLY picking up the output from Gig Performer over the USB. I’ve never seen the SQ5 mixing matrix, so I’m not sure how to do that, but I assume it’s fairly straight forward.

In theory it should make no difference if you use USB or Thunderbolt. I don’t believe the SQ5 has a Thunderbolt interface, so I’m not sure how you’d accomplish that anyway. In any case, I’d test with the USB first so you know what you’re dealing with.

It’s important to understand that the SQ5 is really 3 different things combined in one package. It’s a traditional analog mixer (which adds essentially zero latency), an AD/DA converter (that works over both its USB and Dante interfaces), and an internal digital signal processor. Without knowing how it’s managing these things internally, or how you’re routing your mix, it’s impossible to know total latencies or phasing issues. The only way you’re going to know is to test it.

Once you measure a baseline latency, as described above, then it’s a lot more meaningful to talk about plugin latencies and channel alignment issues. I’ve read conflicting things on the internet regarding the SQ5’s USB audio interface and drivers. Some say it adds 10ms round trip latency at minimal buffer sizes, other say that’s user error. I assume it’s user error, but you need to know that piece first.

Also, are you on a Windows or Mac system?