I’m trying to create a rackspace that’s a simple layer of Pianoteq and Omnisphere and am trying to figure out how I can have my sustain pedal control both VSTs at the same time. Do I need to create two instances of my MIDI In block? In the wiring window, I have two MIDI in blocks of my Keylab created. One controlling Pianoteq and the other Omnisphere. If I try to assign the sustain widget in Omnipshere, the connection with Pianoteq is broken. I’m juggling both GP and Omnisphere manuals to figure this out, but just can’t. What am I missing here?

If I try to assign the sustain widget in Omnipshere, the connection with Pianoteq is broken

If you’re using widgets for the sustain function then set up a widget group.

How to add a widget to a widget group?

The concept behind widget groups is simple: any widget assigned to a group can be controlled by any or all other widgets assigned to the same group. This enables you to change...

That said, the sustain pedal is the sole exception where you shouldn’t use widgets and instead just pass the CC64 message directly to the plugins from your MIDI In block.

Sorry, I’m confused here. I don’t want to create a widget group because I’m trying to work with CC64? If I understand this correctly, I then need to connect the sustain widget directly in Omnisphere? If so, then here’s the procedure I am doing: #1 GP Edit and click on sustain widget. Under Mapping, Pianoteq VST and sustain pedal parameter is linked to widget. Here’s where I’m confused about trying to do the same in Omnisphere. I change the plugin to Omnisphere. Under Parameter, there is a list of numbers. I select the first number after 8 Level and click on Learn Parameter which opens Omnisphere. I Control click on the sustain pedal image and click on Enable Host Automation. I them go back to GP and unselect Learn Parameter and exit Edit mode. At this point, the sustain pedal is not connected in Omnisphere, although under parameter, I see 1SusEn, nor is the sustain pedal now working in Pianoteq.In the Wiring window, I only have one MIDI In block that is MIDI’d to both Pianoteq and Omnisphere. Being more confused, I created another instance of the MIDI In block and followed the same process as before. This time, when the sustain pedal is pressed, the Part Level slider in Omnisphere goes to maximum value, and then returns to minimum value when the pedal is lifted.
I’m absolutely clueless how to address this issue and proceed at this point. I’ve reverted the rackspace to last saved version and have absolutely no idea on how I can figure out what to do next.

I never use widgets for the hold pedal or CC64.
Just don’t use widgets. Connect your MIDI in ports to the VSTi, and it should work out of the box. CC64 is mapped to hold function in almost all VSTi by default.

IF you are using widgets: A CC mapped to a widget is swallowed by default, and no more available to the VST. Unless you activate the THRU switch for the widget, then the same CC will also be passed to VSTi.

There is absolutely no magic required for what you want.

I just connected my MIDI In block to Omnisphere. No widgets. Sustain does not work.

Sustain does not work.

Also. I assume you unmapped any widgets you had associated with the sustain pedal. Remember that if a widget is mapped to a midi message, that MIDI message doesn’t get passed through to MIDI in Block

Please check in Omnisphere, System, that the proper CC (default: CC64 = Sustain), shown in blue, is mapped to Sustain, shown in white : 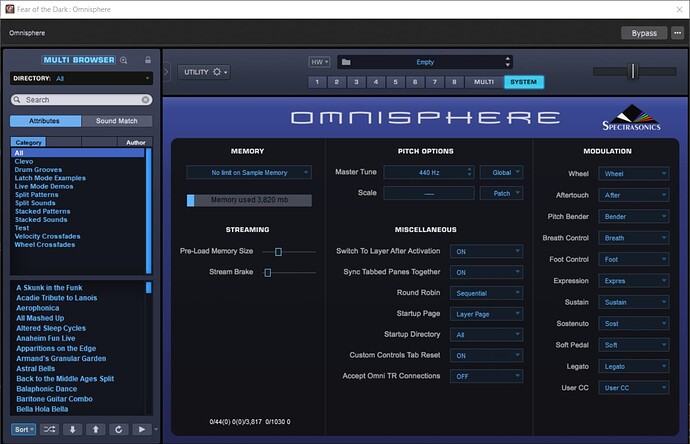 Please check in Omnisphre, Patch, Main, if the sustatin pedal is enabled: 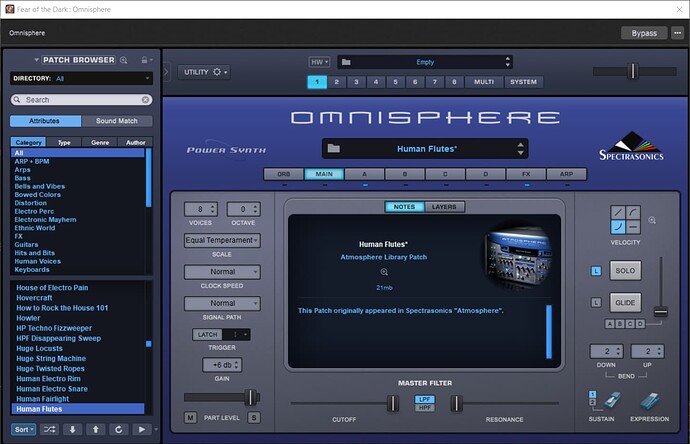 And finally, please check in your MIDI IN block, that Sustain is NOT marked at “Event Blocking”.

And remember that sustain is a MIDI CC on a certain MIDI channel. Your VST must respond to this channel.

Ok, I’m totally confused….are you mapping the sustain to a widget or are you not?