I‘m looking for a change in my music. I’ve had a keytar for a while and I’ve been thinking about an arranger VST that will allow me to get out front and strut around a bit whilst performing. There are a few on the net, but just wondering if anyone has used one and can offer a recommendation.
Thanks.

Quite cheap to test… 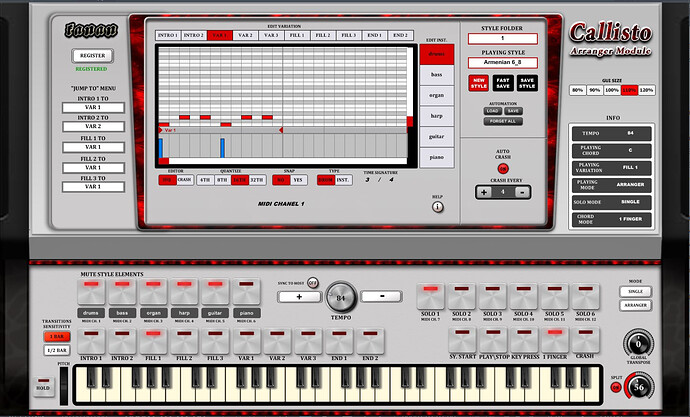 Is there something more you want to do than what RealGuitar offers with its patterns? And being able to use its midi out?

Quite cheap to test

Thanks, I’ll check it out.

Is there something more you want to do than what RealGuitar offers with its patterns?

I’m perfectly happy with the way Real Guitar works, and do make extensive use of it. But I can’t lead with it, as it only provides strums and picking. I do use a kazoo now and then for a solo.

So at present, I’m using RG to trigger an auto bass from Ujam. I can also trigger that from my keytar, but I want to solo the keytar while the Ujam bass is playing, but the Ujam bass keeps following chords that it senses from my right hand soloing. I was thinking of trying something completely different just as an added string to my bow by using the keytar, hence the arranger VST as a complete change. I guess I could sneak my left hand under the keytar strap and try and stop the bass from changing chords whilst I solo, but the keytar isn’t very stable without my left hand holding it. And I don’t want to use midi files anymore after 30 years of being told what to do, if you know what I mean:)

It is true that a keytar is better when playing with only one hand while the second hand controls e.g. the pitch bend. I have two Roland keytars (Axis and AX-Edge) which have the largest keyboard I know. But I don’t like to play on them with two hands while standing. I think if your really needs your two hands for playing, it is better to put your keytar on a stand or use a regular keyboard.

I’m always intrigued by your setups @bigalminal. Have you/someone ever recorded one of your shows?
I hope you audiences appreciate the lengths that you go to!

Wow, thanks for the encouragement! I started on this journey with Real Guitar in 2014. Soon after, I discovered GP V2 and I was away. My original intention was to play RG duplicating the early folk stuff of PPM. Dylan, Baez etc. Then another forum user introduced me to the Strike 2 drum vst and most recently, I found the Ujam series of bases. To answer your question - no, nobody knows how much effort I put in at home for a three minute song. I have had to struggle to get the Guitar Hero to control midi efficiently, but I’ve licked all the problems to date. My latest goal is to get the Bome suite (Bome Box, Bome Midi Translator, Bome Network for PC and Bome network for iOS) working as a unit. To that end, I’ve done a live hook up with Steve from Bome and he has done marvels improving network midi for me.
Regarding a live show - the Music Lab guys when they heard that I was using their Real Guitars in “Joystick” mode for live performance (I may be the only one in the world doing that) wanted a video demonstrating their Guitars in action. To that end, I had my son record a five minute video of a medley of songs in my home studio. It’s not that flash, but shows my setup including pedal board, and sounds not too bad. I would need to know how to get it to you though, as it too large to email. Any suggestions?

Yes, thats the one. Thanks very much.

Don’t forget that we have a new category here, in case that you want to share some of your setup photos (or videos) with the people in the Community

I’ve completed a write up and sent it to DHJ. The video and write up will be uploaded soon. I am hoping for an announcement in this posting as to when the vid can be viewed.

Here’s the video — thanks @bigalminal