I got my guitar connected to my Boss GT-1000 Guitar Modeling Amp. The Audio Out of the GT-1000 is connected with my UA Apollo 8 Audio Interface.
On my Mac I made an Aggregate Device which combines the Apollo and the GT-1000.
Unbill now I haven’t used Guitar Plugins, but Plugins like Overloud offer so many options. So in the future I would like to integrate Overloud in my Setup.
If you are using only one Audio Interface then it is pretty self explaining how to set things up, but I am a little bit confused how to set this up in a Gig File where basically the GT-1000 is the Audio Input for my Guitar and the Apollo is the Output for Guitar and also for Backing Tracks.

If you’re not connecting the GT-1000 to the Mac directly using usb, then there’s no need for an aggregate device. GP only needs to use the Apollo, and the GT-1000 is just something that is coming in via one/two of the Apollo’s inputs.

Doing it this way is having an extra DA/AD conversion though.

GP only needs to use the Apollo, and the GT-1000 is just something that is coming in via one/two of the Apollo’s inputs.

That’s what i thought too, but i guess he wants to keep the guitar plugged in only in the GT-1000 - so if he wants to use a plugin instead of the amp, it would be mandatory that the GT-1000 is able to produce an unprocessed audio signal (input = output) which can be used to feed an amp plugin.
If that’s not the case it might not work properly.
But maybe there was the opportunity to plug the guitar into the Apollo and use an output to be connected to the GT-1000. That way he could route and control everything from GP over the Apollo…

I am very happy with my IK Z-Tone DI box. balanced out goes straight to interface (also powering it with phantom power), and unbalanced out goes through my stomp boxes and then to input 2. Best of both worlds.

I have got a Radial Engineering Pro 48 for this.

OK, thank you very much so far for your feedback. First let me say that the GT-1000 is connected via USB to my Mac. I wonder if I could use the GT-1000 as a virtual DI Box because via USB you get 3 audio streams: USB 1-2 wet output, USB 3-4 dry output aka DI output (for reamping), USB 5-6 wet sub output. If I just use USB 3-4 in Logic as a DI Signal for reamping with the GT-1000 it works very good, but if I use the USB 3-4 as an input for Overloud in Logic the signal seems to be to weak. I haven’t tested USB 3-4 in Gig Performer as input for Overloud because I am confused how to set this up as I said before. I am aware of the fact that there are other possibilities such as using the an Input of the Apollo Interface in order to use Overloud in Gig Performer, but I would like to find a solution where the guitar is always plugged into the GT-1000. Maybe one option could be to make a fake DI Preset in the GT-1000 which contains no cab and no amp. But again I tried this in Logic and it seemed to be that the signal was to weak because in overloud there an option where you adjust the input level of the guitar signal and you have to get into the green zone which means that your signal is strong enough.
It also seems to be (please forgive me if this is stupid, but I don’t have so much experience with Guitar Amp Plugins) that when I use an DI Fake Preset for Overloud for a clean sound it might work more or less, but it doesn’t work for High Gain Sounds. They don’t sound like they should be. There is not enough distortion in those sounds.
On the one hand what I want to do is pretty simple, but on the other hand, right now probably because of my lack of experience I am facing a lot of trouble.

Those of you who are using a DI Box: Do you have to increase the input level of your Audio Interface for the DI Signal or is it just working fine? I wanted also ad that all the inputs of my Apollo Interface are occupied that’s way I don’t want to use the HiZ Input of my Apollo. The only way would be to switch everytime cables, because if I would want to use the HiZ Input 1-2 would have to remove the cables from the line Input 1-2. You can not have HiZ Input 1-2 and Line Input 1-2 at the same time.

If you’re connecting the GT-1000 via usb, then creating an aggregate device with the Apollo is a great option.

That way you always have the guitar wet and DI coming in via the first 4 GT-1000 channels, and you can pick and choose which ones you use in particular rackspaces.

Overloud shows you the optimum input level it wants, so you can always boost your DI level if it’s too low.

What would be the best way to boost the USB D I Signal? With a Gain Unit inside Gig Performer?

Yep. Or any of the input level/gain/trim controls that many of the amp sim plugins have.

I stumbled upon this: 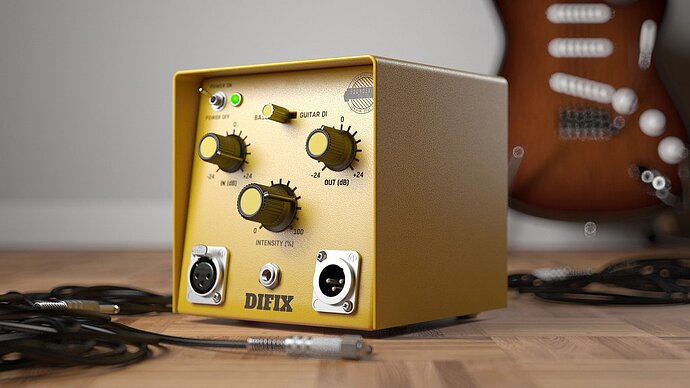