My band is playing along to backing tracks and there are two guitar players. Im using Gig Performer 4 on Windows 10. I have a couple questions, if I can explain them correctly. I am using LoopBe1 internal midi port for program changes and in ableton live I have my channel set to 16. Can I use the LoopBe1 for the other guitar player and set his channel to 15? I am assuming I would need to duplicate the rackspaces for his program changes?

Hi @au8io232, could you provide some more details.

Is Ableton sending the PC messages to GP to automatically switch rackspaces at particular stages of the backing track?

Are you both using GP for your amp sims? And is everything running on the one PC/laptop?

Are you both switching your sounds at the same time?

Yes to all. One laptop and both of us plan to use gig performer to change amp sims throughout the backing tracks. Ableton sends the pc messages to GP. I already set up my own changes with no problem, but was unsure on how to set his up.

If your amp sims weren’t too demanding on cpu, you could have both of your plugins in the same rackspace e.g. you using input 1 and him using input 2 - and then both routing to the same outputs. You could then potentially share some fx like reverb.

So what you’re saying is use another virtual midi output and in the same rack space just add his patches with a different designated program change value?

A rackspace variation has assigned a fixed PC message or not.

2 possibilities:
1 rackspace with all plugins needed from all guitar players.

I think I’m going to try 2 instances of gig performer. That sounds like the best option for what I’m trying to do. I’m new to GP and I have been creating a new rack space for each song. I think I see what you mean by having one rack space for everything. So loading it up with all the plugins and bypassing the necessary ones per each song

Not really. You mentioned earlier that you would both change your sounds at the same time. That was why I mentioned one option was for you to both share the one instance of Gig Performer. 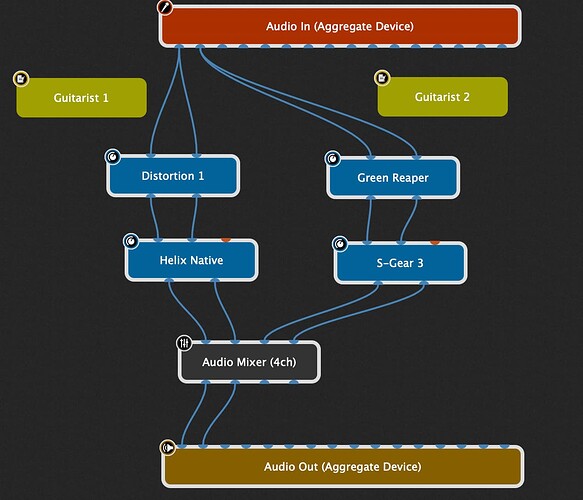 You would then add as many rackspaces as you need for your various sounds.

But if you wanted the most flexibility, than you both having a completely separate instance of Gig Performer would be the way to go (also has the benefit of spreading the CPU load to different cores). But your interface has to be multi-client.

Ah, I see. That makes sense now. I’m using an RME UCX II and am unsure if it would work for running separate gig performer applications.

Nothing is stopping you to try. RME has quality drivers and most probably multi-client.

I’m using an RME UCX II and am unsure if it would work for running separate gig performer applications.

For sure it does, dont be scared to try