What do folks here think of Roland Cloud?

I have been a long time Roland user. I am interested in the Roland cloud service. (I would actually prefer just buying a few key plugins, but that’s not an option.)

Are there any Roland cloud users here? Has anyone used it with GP? If so, please share your impressions.

Hi @amor,
I am not a Roland Cloud user, but I know from a Roland customer, that after one year you can keep one of their plugin forever. I was interested in the Jupiter 8 plugin, but it seems that it is a CPU killer which is probably not justified. No idea about the other Roland plugins. It was not exactly your question, but the Roland Boutique small hardware synth replica, are also interesting… but it is more hardware to handle

I’ve been using Roland Cloud plugins since day one along with GP. There’s good and bad. The good is the plugins sound amazing and if you’re looking for authentic Roland tones especially the D-50 and JV series Roland Cloud is a must. The GUIs aren’t the best, honestly the GUIs for all except the TR emulations are pretty bad. The VST3 versions have had issues with GP in the past, but all work fine now with current build… One of the bands I play in, we do all 80s-90s R&B, Pop & Hip Hop. I wouldn’t be able to convincingly recreate certain sounds without Roland Cloud plugins unless I were to actually buy the real deal hardware unit. Try the cloud free for a month!! You won’t regret it.

PS/ the Juno and Jupiter also kick butt!! Kind of CPU intensive but worth it for the sound!

Have you tried Arturia’s Jupiter-8V before, and if so, how would you compare it sonically with the Roland Cloud Jupiter?

I love Roland Cloud. I have the Arturia bundle too but have not compared those two synths.

Thank you all for your responses! I appreciate you taking the time to reply. If you don’t mind, I have two follow up questions.

A) @krismiller1982 You said that the Juno and Jupiter are CPU intensive. How about the rest (generally)? I am particularly interested in the JV, SRX & maybe anthology.

B) Can you still gig with the Roland modules if there is no wifi available? Does it need to be authenticated every time you instantiate (i.e. load a GP gig file)?

Thank you in advance!

My last computer was a mid 2012 MBP. I was running all of the Cloud plugins fine whenever I gigged. Sometimes I would have layers so 2 JV1080s & a D50 going on at once. The Juno & Jupiter are slightly more cpu hungry but if your computer is runner an i7 or greater you should be ok.

I have ran into problems during gigs with the Roland Cloud plugins not being registered & then having to use my phone as a hot spot to reauthorize them on the spot. But this was entirely my own fault for not making sure they have been authorized at least once a week.

not making sure they have been authorized at least once a week.

Which is exactly why I will not use them. I’ve been on long tours where the laptops used for the show were never connected to the internet. Having stuff break during a tour because of a problem like this is a no-starter, as far as I’m concerned.

I agree that the cloud authorization issue presents a significant problem for performers for that reason. In my case this is mitigated because I am not currently touring. But the idea of having to authorize you soft synths for use during a soundcheck is quite disconcerting. What if there’s no wifi or cellular access?!

@krismiller1982 How long did it take you to authorize the software once you created your hotspot?

Not just an issue for touring musicians — suppose you go on vacation for two weeks and come back just before you have to perform again — is the first thing on your mind really going to be, “make sure to be in a location where I can authorize again” and what happens if the authorization servers go down?

3 seconds to authorize once connected to wifi or hotspot…

Difficult to find any information about their « loyalty program »: after 12 months subscription to the service you are rewarded with an instrument of your choice via the loyalty program. But, I seems that there is no way to download a plugin, you can only access one forever… forever? well… not sure… I found this in a Roland FAQ:

What if one of my Loyalty Program reward instruments is removed from the Roland Cloud catalog–can I choose another one?

So, they consider that « your » reward instruments accessible forever could be removed from the Roland Cloud. Great

Definitely not for me

3 seconds to authorize once connected to wifi or hotspot…

If you remember, if there’s a connection, if the servers aren’t down…

When I’m in performance mode, I want zero external dependencies…there’s already enough stress getting ready for a show, and if it is high profile, the last thing you need to be worrying about is dealing with an authorization issue.

They really should do a both/and like Slate Digital does. Offer the cloud service but give users the option to purchase their must-have plugins.

Cycling74 (makers of Max) have an interesting approach. You have to validate your account every few months but if you don’t, your Max apps continue to work, you just lose the ability to save. That may be a reasonable compromise.

Besides the online authorization issue, The subscription model gets pricey for individuals like me unless I am a big studio or something like that. Roland changed their policy a bit since the beginning and let subscribers “keep” a plug-in at the end of each year. That’s better.

“You can reduce the load on the CPU by lowering the polyphony.”
All the presets seem to default to using the full 8 voices. For single note melody lines, 2 voices seem to work fine, and doesn’t seem the degrade the sound.
4 or 6 are plenty for most stuff. And, the polyphony setting is set “per patch” and will be saved with each patch used, in the GP rackspace file.
Also, I found the Roland to be brighter, with more sparkle, on comparable patches (compared to Arturia). 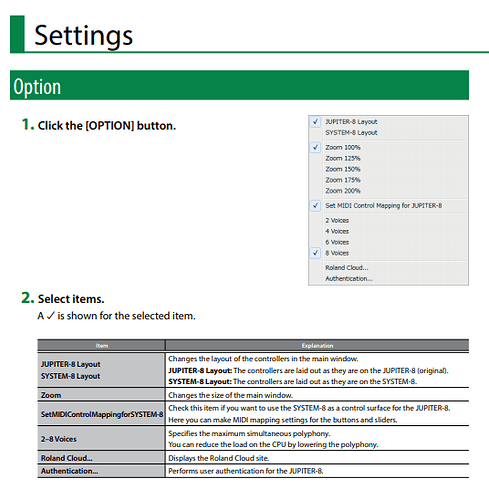