Surface Pro 6 getting hot prior to GP crashing

For what it’s worth Windows 10 still flakes out on me from time to time. I just formatted my system drive and did a clean install on my main audio machine yesterday. I did it on that same machine over the summer also.

Once windows starts acting up on me I find it a lot faster to just reinstall everything than to try figuring out why it’s acting funny.

That’s the way I think too. As good as Win 10 has become compared to all the previous versions, I usually find that if an app starts playing up, then it’s generally Windows fault. I did have a Macrium image of this present build, but I seem to have deleted it. It’s usually a days work to install everything, so it’s a good thing I’m retired and have the time.

@bigalminal I just examined the last crash reports and in your case - your RealStratElite sampler is crashing. It has nothing to do with windows surface which has proven to be very stable actually.

Please see if there is an update to these plugins and contact the developer of these plugins with the information below. Maybe they’ll find a problem and fix it.

Here is the information about your crashes: 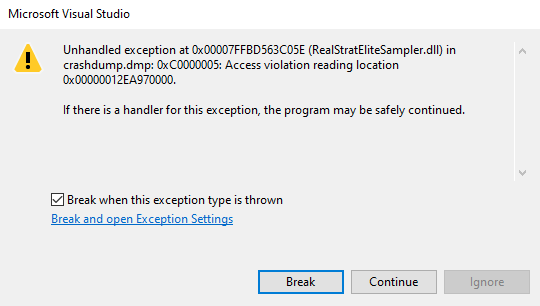 Thanks very much for the info. Just for my info, is there a better way to send crash reports? Or at least, get faster feedback? A good week went by without a word of what the crash cause might be. Just asking😃.

Or at least, get faster feedback?

You are right, 12 answers from members of the GP community, and only half of them were from the GP developpers. (they even don’t know the GP version you are using) And finally an analysis of your crash report after 3 too long days, this is unacceptable! I am pretty sure they are developing GP 4 rather then taking care of you… unacceptable!

I think he was referring to the GP functionality that asks you if you want to send in your crash report after it crashes. I’ve used it a dozen or so times and I’m not sure it actually goes anywhere.

Yes, I was referring to the crash report dialog that appears after GP closes.

The purpose of those crash reports is to allow us to see trends and detect any issues with Gig Performer itself. 99% (maybe even 99.9%) of crash reports that we see are due to either misbehaving plugins or something else (such as an AV program) interfering with operation. They are collected and reviewed periodically, certainly not at the moment they show up, else we’d get nothing done!

When we do see a real issue, we try to address it as soon as possible.

It is not practical to respond individually to every crash report.

It is not practical to respond individually to every crash report.

Understood. But if a consistent fault arises in GP or Windows itself, then having access to the cause would have been of great benefit in my case. Is there a way that GP could generate an automatic response which then sends the author of the crash report an invitation to view the said report? As it was, I spent a week having GP stop working in many sessions including a live on the job crash. Had I had access to the report, I could have identified the offending plugin, removed it and hopefully carried on crash free. As it is, I am now rebuilding Windows “again” because the diagnosis that the report generated came too late for me to use.
If such a feedback system could be set up, then we the users could be the reporters on the deveolopers behalf.

Best you send such a crash report (caused by a plugin) to the plugin developer.

I think there already was an update, but I’ve decided not to install that particular plugin again, just in case.

Generally you should always be running the latest update. There’s always a good chance that the problem you encountered was already encountered by others and has been fixed.

I fully agree. I have a Windows 7 computer dedicated to my keyboards rig. I installed it six years ago and never reinstalled it. Reinstalling Windows all the time doesn’t bring anything.

There is an export button that exports the crash report as a zip file so you can look at it yourself.

Reinstalling Windows all the time doesn’t bring anything

Ok, but if Gig Performer isn’t at fault (I read this statement a lot in this forum), then it must be Windows. Or is it the plugin? How do I track down what is causing the problems? In the past, I’ve found that when a program plays up, a Windows reinstall usually fixes things. If I don’t reinstall Windows, then:
1 How do I find out what is causing the crash or what ever, and;
2 How do I fix the problem and get GP working correctly and reliably again?

@bigalminal - these are loaded questions that roughly translate to “how do I make my windows machine 100% stable?”

Unfortunately - there’s no perfect answer. The stability of any machine begins with its hardware components and it then moves to the software you use.

As @David-san already mentioned - reinstalling Windows does not do anything if you repeat all the steps yo’ve done before.

For a Windows computer - Ableton published an article that I found to be really helpful. It explains what should be done to make your Windows machine as stable as possible.

That’s highly dependent on how you use your system and what you expose it to.

Clearly “reinstalling windows all the time” leaves room for interpretation. I’d say I average about once every two years across my systems. Windows has definitely gotten better over time, but if you frequently install and uninstall software my experience is that sooner or later you’re better off with a clean install than trying to track down a problem.

Here’s my latest. I replaced a Focusrite interface last week with an RME UFX II. First thing I noticed was any time I had the TotalMix FX window open I’d get static while playing. It mostly went away with TotalMix closed, but I’d still get static sporadically. Turned out disabling my network card would make that go away. So the only way to get static free playing was network card off, TotalMix closed.

This was rather frustrating, given that my system ran flawlessly with any of my other four audio interfaces. Only thing that changed was adding the UFX II.

How many hours is worth investing to try to track down the problem?

Four hours in, it was too much for me. I’ve been down this path too many times. Clean install, and two hours later I’m done. Machine working perfectly.

I don’t understand the aversion to reinstalling. It can be a massive time saver.

I don’t understand the aversion to reinstalling

The aversion I personally have is that without understanding the problem you will inevitably be in the same boat again and again. Finding out the root cause is much better. Something was interfering. Disabling your network card was a good starting point, but basically shutting down everything except the bare minimum to operate is even better. Then you’d enable things and try to figure out what’s wrong.

Reinstalling will work for a little while, but the time it takes to reinstall everything, authorize all your software etc… is really not something that should be considered a routine.

Reinstalling will work for a little while, but the time it takes to reinstall everything, authorize all your software etc… is really not something that should be considered a routine.

After 20+ years of using Windows, my experience differs. I suspect my normal “use case” differs as well.

My experience is, if my machine starts acting up it’s generally futile for me to try tracking down the problem. It could be a bad interaction between something I installed today and something somebody else installed and deleted six months ago.

I can reformat and reinstall everything I need in about two hours, mostly unattended. Sometime in the next couple years similar problems will happen again. I’ll reinstall again. That’s just the nature of my computing environment.

Ah… yes … my gigging laptop is “frozen in time”

Nobody touches it - not even me - until I’m ready to gig, rehearse or MAYBE update something. If you have many people using that laptop for many other things - yes - all bets are off really.