OK, so you don't have a keyboard with Poly Aftertouch!

I just stumbled onto an interesting plugin by accident. It is called “MidiConverter3” by “Insert Piz Here” and I think it is free. For those who don’t know what this plugin can do, let me give you an example…

I have a MIDI keyboard that can send Aftertouch but not Poly Aftertouch, so I can’t really use my Hydrasynth Desktop effectively as it needs Poly Aftertouch to really come alive! Unfortunately, I think most of our keyboards fall into this category. I solved the problem using GP and MidiConverter3!

OK, so let me showed what I did:

I suppose this could be handled with a Scriptlet but this solution seems to work. I will post the Rackspace/Gig File once we agree it is useful and once I figure out how to post it. 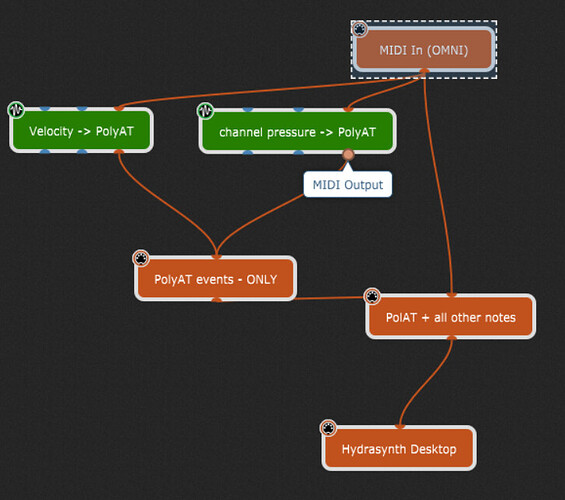 Take a look at this Forum entry
Polyphonic Pressure Generator

PPG looks very cool and I will give it a try. I follow Tim Shoebreidge and was surprised that I missed this one … LOL! I just downloaded PPG and Voltage Modular and will give it a try this evening. It looks like he added a few more controllers … as I only have two (velocity and channel pressure). I like the fact that you can use the CC64 to trigger the effect. For $19.00 you can’t go wrong. LOL! … that is if it works transparently in GP without sucking up a lot of resources.

Remember, my Rackspace was only a Proof of Concept and could easily be taken a bit further. I was also hoping, that GP would do this in a Script and then later make it a standard feature in a MIDI Block or MIDI Filter.

Maybe my script is also working for you.

Your script looks good and should work OK. Now get David to make this a standard “MIDI Filter feature”.

Tim Shoebridge with his Voltage Modular/PPG plugin has obviously taken this conversion feature to a whole new level of control. I am going to play with all of the solutions and report my findings back to the group. Thanks for doing the script.

Now get David to make this a standard “MIDI Filter feature”.

There is no “standard” way to do this. For example you yourself noted that you used two separate algorithms

The beauty of GP Script is you can create suitable algorithms for specific needs. Can’t do that with a “standard” MIDI filter.

Wouldn’t this be the perfect candidate for a Scriptlet?

After playing around with various versions of PolyAT generators, I have discovered that Piano Paul’s Script works best for me … but as a scriptlet. Here it is as I translated the script into a scriptlet. In my scriptlet (Piano Paul’s code essentially), I added a 30 boost for more attenuation. You can change this value in the code or omit this portion of the code entirely. The only difference between the script and the scriptlet is that the scriptlet does not need to reference a MIDI block as it sits between a MIDI Block and a plugin or in my case a Hydrasynth Desktop. OK, here is the scriptlet code: 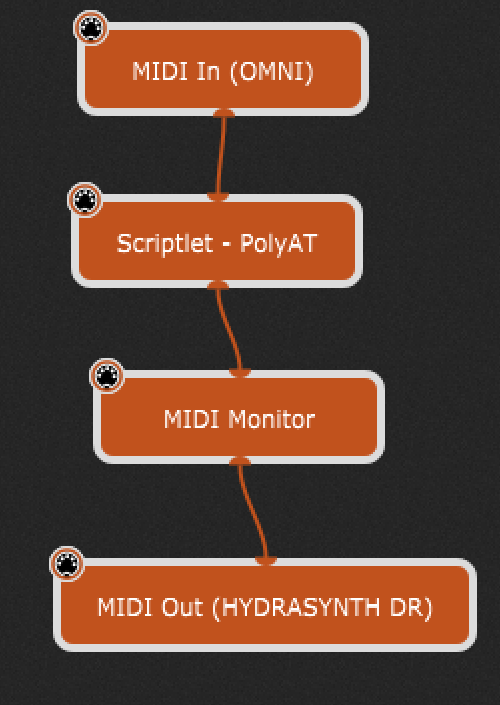 (edited by @schamass as mod: used the “code format” for better readability)

Something for the Gig and Rackspace FIles section of the forum ?

You read my mind