Creating your own Impulse Responses

I’ve got a few Melda plugins, one of which is MConvolutionMB (impulse response loader/player and also recorder). When I first bought it, I tested the IR record feature on an Arturia spring reverb plugin - and I thought it worked really well.

Today I was testing out the new Softube plugin Celestion Speaker Shaper (guitar speaker/cabinet simulator). I’ve haven’t looked into the technical details of how it works (e.g. maybe a hybrid of impulse responses and custom EQ) but I found it really quick and easy to get great results - I particularly like it’s room effect. However, when the room effect is engaged the CPU jumps up substantially.

I decided to give the IR record feature another go - I took separate recordings of the dry speaker/cabinet, the ‘near’ room effect (100% wet) and ‘far’ room effect (100% wet). The actual recording in MConvolutionMB takes only a few seconds to setup - connect a plugin before and after Speaker Shaper, then press Record on the post plugin, and Test Tone on the pre plugin, and then stop recording on the post plugin. It then prompts you to save the IR. 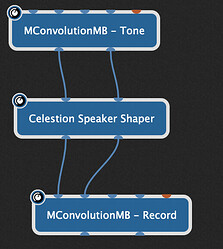 My replacement chain in GP has a separate instance of MConvolutionMB as the IR player for each of the captured IR’s: Cab, Room Near and Room Far. 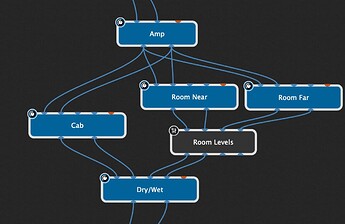 I’m actually struggling to hear any difference between the original and my IR’s (that aren’t due to simple level differences). But importantly, the GP CPU reading is now 25% instead of 50%!

By default, Melda plugins auto sleep/bypass when there is no input detected by the plugin e.g. highlighted by the ‘Sleeping’ label at the top of the plugin.

Because the first instance of MConvolutionMB does not have anything connected to its input, click ‘Settings’ at the top of the plugin and then untick the ‘Intelligent sleep on silence’.

Great post @rank13, I was thinking about how to record my own IR for the fun. I didn’t know that MConvolutionMB does it. As far as I remember the whole thing is to record the tranfer function of a Dirac, so I suppose they generate something like one single sample at highest level and record the result. I am surprised that this approximation of the theory gives so great results, but it is an excellent news. Great findings @rank13 sir!

@rank13 Really nice!
Thats always the issue…cpu hit with good IR
Trying to get some friends to dump their Quadboxes and do differential eq + IR on a fixed full range monitor.

CPU hit is identical for a convolution with good or bad IR.

Trying to get some friends to dump their Quadboxes and do differential eq + IR on a fixed full range monitor.

Very interesting, give us a feedback.

I meant not all ir engines are created equal

Well, I perhaps passed something important, but something went wrong here:

The Guitar Rig 5 Cabinet/Amp I am trying to record doesn’t seem to let the “dirac tone” pass through. I don’t know if there is a noise gate or something like that blocking the sound… I will have to try again…

It’s likely to be the VST3 auto sleep/bypass when it has no input on the first plugin e.g. highlighted by the ‘Sleeping’ label at the top of the plugin.

Click ‘Settings’ and then untick the ‘Intelligent sleep on silence’.