What would you think of a widget that would represent a VST on the panel by an automatically taken screenshot of the selected VST’s UI window?
It would be just a picture frame which shows a snapshot of the UI window, so you could instantly see what the VST is about and maybe even the settings: 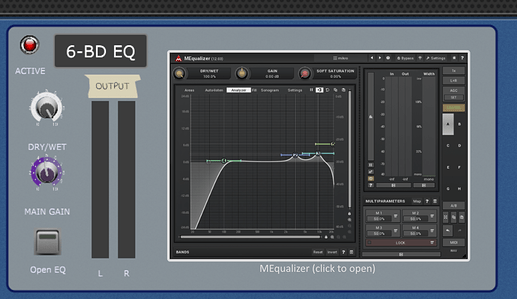 eq-panel_frame-widget1030×596 278 KB
Clicking on that widget should then simply open the plugin, so you can make changes.
There should then also be a “refresh” option to adopt new settings.

Maybe this “auto screenshot” behaviour could also be optional, so this picture-widget could contain any graphics and could point to any plugin that’s in the list of used VSTs.
Of course then there also had to be then an “open plugin” parameter to be as much flexible as possible.
I think this could be quite an eye-candy to the panels (of course it also could lead to visual suicide, but that’s already possible with the given widgets).

I came to this thought when i tried to learn the parameters of Melda’s EQ to a bunch of widgets, just to visualize the settings on the rack panel… but it seems that some of those widget-connections get lost, when the settings of the EQ generally change. And adjusting the EQ only over knobs (without seeing the curves) didn’t make me happy either.

So i thought this might come quite handy, also for other plugins than EQs.
What you think of that?

Add the possibility to load a picture in a panel (with some resizing options) and make the panel clicable/touchable, and we are very close from what you requesting. Il like nice GP panels especially for those I use very often, and I would definitely use picture panels, but I am not sure I would waste a lot of usefull screen space with a plugin window screenshot.

Add the possibility to load a picture in a panel (with some resizing options) and make the panel clicable/touchable, and we are very close from what you requesting.

That’s exactly what i requested - well, this auto-screenshot functionality i described could be a nice addition to that.
But wether someone wants to use this widget (or the extra option) or not, is… well… “optional”, as are so many things in GP.

When the panel would be clickable/touchable: would you like to edit some VST parameters in the screenshot itself?

No, it should only be a visual representative of the plugin UI.
I think there are some plugins that won’t need to have realtime-controls on the panel, but which would have to be adjusted from time to time (like an EQ for example).