I would like to be able to transpose my garritan plugin up or down at will (live) with the press of two buttons on my fcb1010.
Could someone please run me through the steps to accomplish this?
Thanks.

How is transposition handled within your particular Garritan plugin?

A small window to click in but it is not a parameter made available to midi.

It is theoretically very easy:

In the button properties:

I don’t see momintary buttons to choose from.
This is all new with the learning curve. Can you be a little more detailed?

When I said “theoretically easy” it is because it is the kind of thing you learn when reading the manual. Having said that, in the praxis you can have particular issues when trying to apply the theory. So, it is perhaps better you to explain what you did, and what didn’t work for you.

learn the - and + transpose parameters to the button

Which - and + tranpose parameters are you talking about? The +/- buttons on GP3 Midi In Block are not learnable (although it might be a great idea to add that)

OK — here’s a simple gig file which has a single rackspace in it containing the Aria organ plugin. However, if you switch to setlist view, you will see that I have created several “songs”, all of which just have a single part and each song’s song part refers to that same single rackspace. You will want to read up on songs/setlists in our user guide to understand this better but basically you can set the transpose for each song separately. So all I did was create four songs, named by their key, then double-clicked on each song and set the transpose for the song (see the red arrows)

Granted, this is a hack but it works.

It’s rather ironic that in all the time that GP has been around, nobody has ever asked for a way to just increment or decrement the transpose amount. However, a future version of Gig Performer will support this directly through Midi In Blocks which will provide a lot of flexibility. 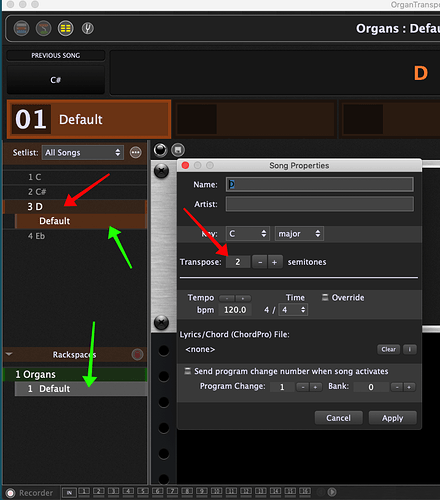 You can associate global setlist commands (Next Song and Prev Song) with MIDI messages so as to use your pedal controller to now move up and down the list of “songs”. 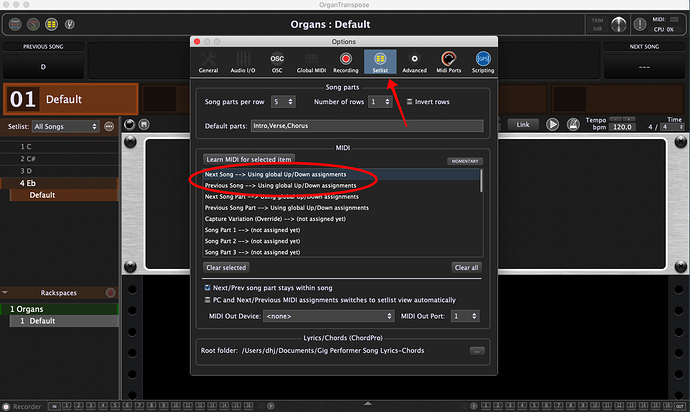 There are other ways to approach this using our built-in programming language but given what you’re trying to do, this should be sufficient to at least get started.

It’s rather ironic that in all the time that GP has been around, nobody has ever asked for a way to just increment or decrement the transpose amount.

I thought the same thing. I kept looking for a way to help him without scripting. I would have needed @pianopaul to help out with that🙄.

Thanks for all the help!

Which - and + tranpose parameters are you talking about? The +/- buttons on GP3 Midi In Block are not learnable (although it might be a great idea to add that)

You are right, bad advice from me to @fchazz, I have to confess that I never use transpose this way, but I was pretty sure those buttons are learnable. But you are right, it could be an interesting idea to add this possibility.

Most of my transpositions take place within the piece I am playing usually in the middle or toward the finale. (It is a big theater pipe organ with orchestration instruments). And I do change keys between songs just to mix it up.! I will be anxiously awaiting the next update to the software because setting up the transposition in the midi in cell block should work the best for my purposes. Screenshot_20200915-221118_Gallery|281x500

I don’t have much time to explain now, but you can try this gig file which uses a GPScript which implements control buttons and slider to change the Global and MIDI in transpose (the last one is scriptless and works fine with variations).

Jpt,
I am back in town now. So when do you think you might put out the next update with the transposition feature we talked about? (Tranposition learn in the midi in block)
I am thinking I will hold off on the purchase until I know I can use it with that feature on my mac.

Why do you need that learn feature?
You can use a widget this way 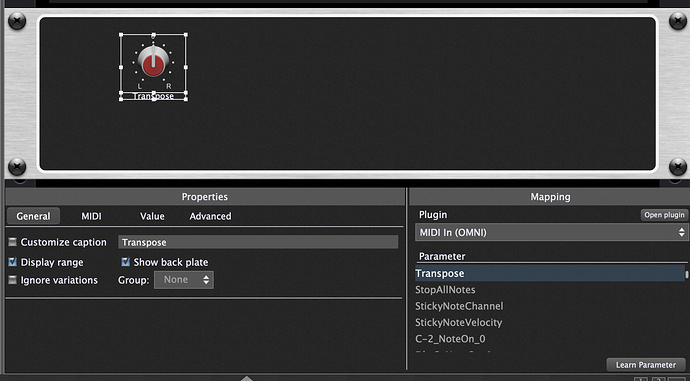 And why don’t you start to test this also:

I tried this gig example…works great! I control it from my iPad. It works fine with the FCB1010 also when a switch is set up for momentary use. I have the Un0 chip which makes this easy. But I think it can be done with the stock chip also. Otherwise it requires 2 clicks.