Several NDSP plugins in one Rackspace

I have added several Neural DSP Plugins into one rackspace and turn them on (= un-bypass and show editor) and off (= bypass and hide editor) with widgets, generally just using one at a time. Do these plugins add to the latency and CPU usage when in bypass? Would it be better to have separate rackspaces for each plugin? 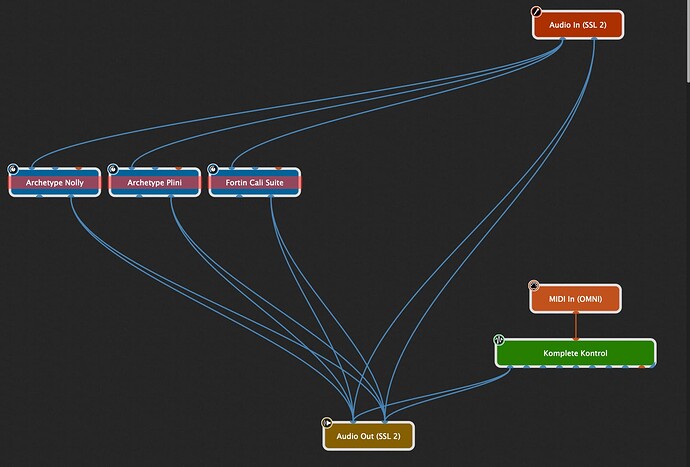 CPU is not used when the plugin is bypassed via the Gig Performer bypass.
Some plugins can be bypassed with the plugin’s inbuilt bypass, but CPU is no reduced.

Thanks, sounds good in this case! What about latency? Since I have not chained the plugins, do they still take on latency when bypassed?

I don’t think so.
When bypassed via Gig performer Bypass the should not be able to process audio and then no latency.

This is off topic but remember that the unprocessed sound from the SSL will pass into the bypassed plugins and be added twice to the active plugin sound.
If you only want to have the sound of one active plugin, you have to use gain control plugins that you mute or unmute instead of bypassing the amps.

Thanks (both for the welcome and the comment)! I thought that by choosing just the right out I don’t get the raw signal. At least I’m not hearing it anymore compared to when I use the plugin‘s left and right out. Also, I want to save CPU usage which is why I’m bypassing the non-active ones. Should I better bypass and mute them?

Yes, Bypass to save CPU and mute to block the audio

PS: Doesn’t matter whether I put everything in one rackspace or better use separate ones?

When you use separate rackspaces you are more flexible and do not have to take care about bypass and mute.
Only Plugins in the actual rackspace should consume CPU

Sorry, one more: Rackspaces preload/predict at least 3. So technically wouldn’t it be more CPU-hungry, if I had 3 to 4 rackspaces, than bypassing the non-used plugins in 1 rackspace?

No, even with predictive load off, 10 rackspaces do not consume more cpu than 1
Only plugins in the active rackspace Consume cpu when the plugins are coded well

There should be no latency when bypassed. I find it more useful in my genre of gospel to have multiple plugins running in one rackspace. I actually have 2 keyboards running on the same instance with 8 plugins a piece on an M1 Macbook and also an I7 Macbook Pro from 2012. I am running this at 196 and 256 and I’ve not seen a CPU usage above 50% at any time even with layering up to 3 sounds at a time. Keep in mind that I am using PianoTeq, Keyscapes, and other bulky CPU hogs on the market. Keyscape just optimizes the plugins for delivery in a live environment.

I have tended to hedge on the side of creating new rackspaces, rather than bypassing instruments.

But, I guess it should be pointed out that, in the case of sample libraries (as opposed to effects, which are being discussed here), using multiple rackspaces for the same instrument will eat up more ram. (That’s my understanding).