So, I’ve written the script for those two steps into two separate functions. It works well if I run step 1 above first, WAIT, then do step 2.
But, if the two steps are called one after the other (from a “On Variation” event handler), it appears that step 2 jumps ahead of step 1, which won’t work because step 2 by its nature has to execute after step 1 is completed.

I’ve looked through the documentation at length but can’t find a suitable delay function or a “SendSysexExternalLater()” function (although there is a SendSysexInternalLater() function). Any ideas?

Maybe this can give some ideas?

How to delay a control change message Scripting with Gig Performer

Hi, I would like to delay a specific control change message for 40 milliseconds. More specific I use a midi pedal as a ‘midi block in’ that sends a cc 64 Hold pedal 127 that I would like to get delayed for milliseconds after I put my foot on it. Releasing my foot cc 64 Hold pedal 0 should be instant, so without delay. Can this be achieved with gp script or it there a simpler way to achieve this within GP? Maybe some advice on how to apply the script. I am new to this. thanks.

…sorry out of the studio.

Try an used midi in block (e.g. the Midi In OSC) and then route that to your midi out block. That way you can use the SendSysexInternalLater sent to this Midi In block.

Perhaps you could try a combined function SetModeAndPreset(midiOut : MidiOutBlock, mode : Integer, preset : Integer), such that it could perhaps keep the correct send order.

, it appears that step 2 jumps ahead of step 1,

I’m confused. Are you saying that the second message is being sent out before the first one?

Or is it the case that they are being sent in order but your external device is responding to the second message before it has finished dealing with the first one?

it appears that step 2 jumps ahead of step 1

@dhj is right, how did you check this?

Thanks for the suggestions everyone. Some interesting ideas there.

@dhj Are you saying that the second message is being sent out before the first one?
No, whether the second message is completely before or too close to the first I can’t precisely tell. The keyboard takes longer processing a Mode change request than it does processing a Preset change request. It appears as though the second is processed by the keyboard before fully completing the first request. Is that even possible in Midi messaging? I don’t know enough about Midi, but if midi messages are serial messages and the keyboard completes processing one message before processing the next, then my lack of midi knowledge would think the second one jumps ahead of the first. I don’t know enough about it.

Given the two test methods above, it seems probable that adding a delay between the Mode and the Preset changes might solve the problem?

I’ll try the suggestions from the other guys as well. Thanks…

No, whether the second message is completely before or too close to the first I can’t precisely tell.

Well, you could, using an external MIDI Monitor

Given the two test methods above, it seems probable that adding a delay between the Mode and the Preset changes might solve the problem?

Perhaps just throw in a for loop, perhaps a nested one, to just waste a bit of time.

Well, you could, using an external MIDI Monitor

I think, that’s indeed the next step.

Just an update. Using an external MIDI monitor we can confirm that the first message send and second message are sent out in the right order everytime, but the timestamps are on the same millisecond (except the first run), see picture below

Btw, just to be clear, the title of this thread is wrong. If anything it should be SendLaterExternal because SendNowExternal is the one that needs a delay, not SendSysexExternal.

Anyway… I’m having a good time with GP 4. Great community support, great software. Thanks everyone… 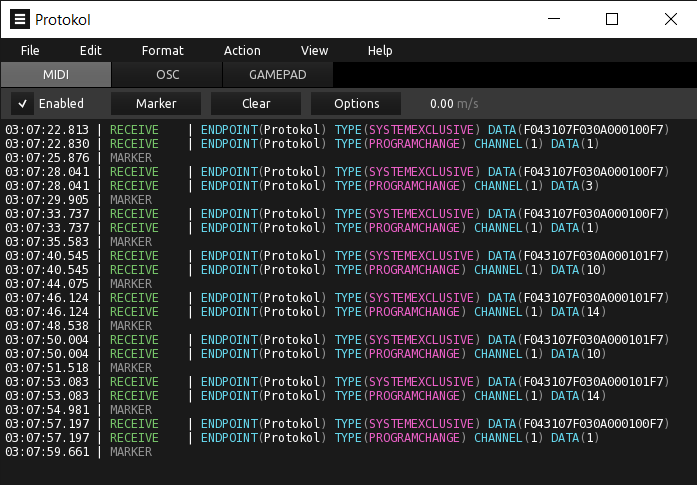 Btw, just to be clear, the title of this thread is wrong. If anything it should be SendLaterExternal because SendNowExternal is the one that needs a delay, not SendSysexExternal.

You are right, you succeed to make me look into the wrong direction too. So, it could be nice to add SendSysexExternalLater, but you solved your problem using SendLaterExternal, right? (which is probably better than blocking a callback with a waiting loop inside)

By the way, interesting multiplatform analysis tool:
https://hexler.net/protokol
I need to test this ASAP…

By the way, interesting multiplatform analysis tool:
https://hexler.net/protokol
I need to test this ASAP

Oh yeah, that’s a much better OSC monitor than what I was using!

Unless my glasses are playing up again, SendLaterExternal is not available yet as of now

. But yes, if it becomes available in future I’d definitely mod my code with it. For now, I’m using a While Do loop monitoring elapsed time on each cycle. Also agree, a blocking loop is not great practice. Ok… enough coding… time to… gig

SendLaterExternal is not available yet as of now

SendLaterExternal is not available yet as of now

Just to be clear — that would not have helped your problem — in fact it would have made it worse because your program change would get sent out first.

The underlying problem here, as I understand it, is that your synth cannot respond quickly enough and so the only correct solution is to wait for a while, which is what you did.

The concept of a SendLater was really intended for doing such things as scheduling Note On events and automatic NoteOff events in the future, i.e, to implement the concept of a note with a duration.

So it doesn’t send any other MIDI message later?

It certainly wouldn’t be a big deal to add this functionally for sysex but what’s the use case?

My quastion was for any “SendLater” MIDI GPScript function. Here we have a use case where it could be interesting to send a non-sysex MIDI message later. Does these SendLater function only send note messages later?

Does these SendLater function only send note messages late

Per the documentation, that function will work with any MidiMessage

However, a SysEx message is not considered to be a MidiMessage (from GPScript’s perspective) because it has to be handled completely differently, i.e, arbitrary length vs a single 32 bit integer. That is why they have different types.

Agreed. Could be interesting to be able to send anything later even if we only faced the use case for a delayed version of SendNowExternal here:

SendNowExternal is the one that needs a delay, not SendSysexExternal.