When bypassing certain audio effects plugins that have a long tail, the cut off sound is rather harsh. It would be nice to have something similar to the plugin persist that would cut off audio input when bypassing, but would allow the tail to play out. Anything out there for that? Looking at you @David-san LOL

I could probably use the regular (midi) plugin persist with a combination of of a 4ch mixer and a widget switching output channels to route the audio away from the plugin, (since plugin persist only blocks incoming midi, not audio), but if its possible to allow the audio to flow through the plugin (like when its bypassed) BEFORE it is bypassed, but not process its signal (just like the midi plugin persist works with midi) it would be very elegant!

When you use different rackspaces you have the options set set the Audio Tail length for the Audio Input and Audio Output. 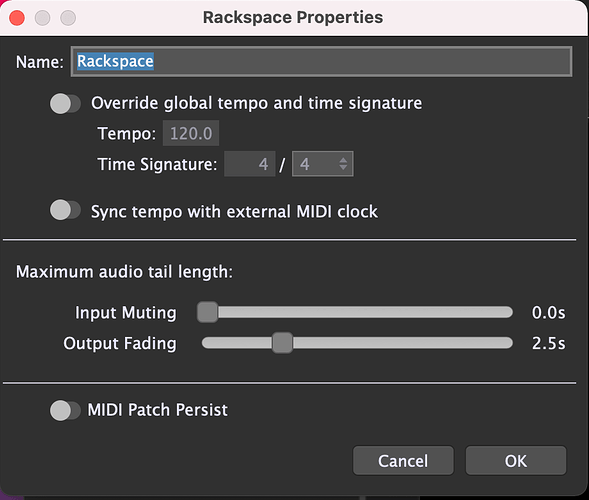 Right. Sorry, forgot to the mention that this plugin is in the global rackspace and all sounds from all local rackspaces are routed to it.

OK, understand.
For Delay and Reverb Plugins: Just stop sending Input Audio then you “bypass” this effects but you do not cut off.

I want to keep playing, just turn off this FX, so that’s basically what I did by creating a parallel feed with a 4ch mixer and changed the output (grouped a widget with the bypass) so when I bypass the plugin, I route the audio to a different path and with the plugin persist I delay the bypass by 5000ms. I was just wondering if its possible to do all this without that extra mixer (or another way of stopping the audio feed) but the more I think about it, there probably isn’t.

You do not need a different routing, you can Mute a Gain plugin.

But if that’s my only feed, then my dry sound disappears too, which I do not want. Unless I am misunderstanding something…

OK, I always use Reverbs in parallel, so my gain works as a send.
The dry runs in parallel to the effect.

Got it, assuming I already had another audio path for the dry. That makes sense. I got it working nicely now. I wanted to also bypass the plugin, so the combination of stopping the audio feed with a long delayed bypass with plugin persist works nicely.