Midi in to multiple Midi out channels to plug-in?

Hi - any way to map my incoming midi keyboard ch 16 to multiple midi out channels - eg 15, 14, 13,12 when going to my plugin (Garritan Strings) ? Garritan allows you to put different sounds on the different channels, but I would like to layer them all together by just playing the one keyboard.

What about that using Midi Constrainers? 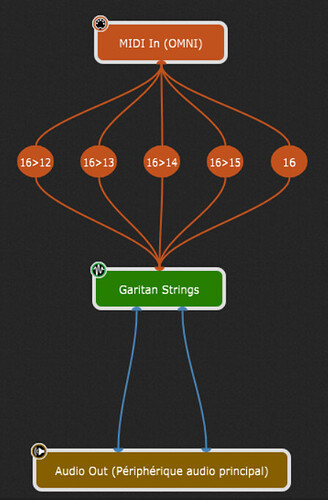 @David-san’s solution will work if all you need is layering and with everything else the same.

However, you can also use multiple MIDI In blocks and change the channel mapping of input channel 16 to 15, 14, 13, … on each MIDI In block. The advantage is that you can create (overlapping) splits, possibly transpose, different velocity ranges and so forth. That last will let you make some channels louder than others as you play harder (say)

Hmm, I wonder which solution is more efficient? If all else is equal, I’d use the constrainers as they more visually represent what you are doing.

They are not equivalent since the MIDI In block gives you much more flexibility.

As for efficiency, we are talking about MIDI messages (originally designed to transport over a serial port at about 1ms per message (2/3rd of a millisecond if status byte is not included and on computers that ran at about 10Mhz)
Given the speed of computers today, I really don’t think you have to be concerned about efficiency of multiple MIDI In blocks.

I routinely have 10-20 MIDI In blocks in my rackspaces!

What do you mean MIDI In block is more flexible in this case? Would this be a matter of easier to update if something changes? I guess either way would work but unless there is a downside, the former solution just makes more sense to me because I can visually see it without opening the various MIDI blocks to see what is happening. If there is downside to @David-san 's way of doing it, I would be interested to know.

Edit. Not intended as and argument. Just trying to understand since as you know i’m a newbie here.

I prefer @David-sans solution. I don’t like multiple MIDI In blocks for one keyboard. One MIDI In block = one MIDI keyboard for me.

Even more, since GP does not visually indicate incoming signals (MIDI events) in Blocks, I try to use as few MIDI In Block as I can.

One MIDI In block = one MIDI keyboard for me.

Aha, yes makes sense if you are doing a lot of splits. I didn’t consider that since I seldom do them. I have 4 tiers of keybeds and so seldome do splits.

Thanks for the clarification @dhj !

If the only thing you’re doing is layering multiple sounds over the entire keyboard and you don’t need any other control, then sure, the constrainers may be sufficient. But I would also note that on the ARIA player, you can change the MIDI channel for each timbre so if you want four layers, you could just set four patches to the same MIDI channel and just use a single MIDI In block - no constrainers needed.

But suppose you want to use two sounds and one of them has to be transposed up an octave, then the easiest way to do that is with two MIDI In blocks, one of which has the transpose increased by an octave.
Or suppose you have piano and strings and you only want the strings to be heard if you play notes with velocities higher than 80. Then you’re going to want to leverage the velocity scaling component in one MIDI in block so that only notes played with velocities higher than 80 pass through. Or suppose you want to do cross-fading… many other things…multiple MIDI In blocks is usually the way to accomplish many of these tasks.

Or suppose you have strings and you have a synth lead layered over it - you’d like the pitchbend to apply to the synth but not to the strings.

Lots of other cases where multiple MIDI In blocks are the best (and often easiest) solution.

I don’t really understand the long discussion here, I strictly answered to a user requested, while @dhj is widening the range of control possibilities and he explained it very well. OK, we should perhaps also give an example of layers triggered by different velocities, but I think it is also a good solution.

Wow - didn’t even notice that! That solves my immediate issue for sure. I appreciate all the responses and options.

I don’t really understand the long discussion here, I strictly answered to a user requested, while @dhj is widening the range of control possibilities and he explained it very well.

Yup - both solutions will work - it just really depends on what @kbmatson really needs.Also don’t understand the long discussion

Can’t really do splits without multiple MIDI In blocks.

That’s true. I’d like to have the same filter functionality that is available in the MIDI In block window as an additional “Filter” processing block. Then we could take one MIDI In block per keyboard and route and manipulate the MIDI / note data and send it to different instruments. For me, that’s not about the plain functionality but just easier to follow and make changes … highly subjective.

Actually, I could already do this via Scriplets

I have to agree that these Midi Constrainers are graphically very nice and its easy to SEE what they do. If we start to add split and filtering options to them, you will also have to guess what they really do. Then if we have the same option on both MIDI in blocks and constrainers, it will become to be tricky to know where a specific split or filtering is done.

Well, perhaps we should discuss things like that somewhere else…