How to connect 2 GP instances with "loopback"? (solved, works on M1 mac)

same story, new thread, sorry ( but i think its best to keep the topics separate since this is a own new one)

how would i connect one GP instance with a second, using the Rogue amoeba “Loopback” device as the inbetween?
Also is the question for me now in the play if GP3 itself is not also a limiting factor on the new M1 mac ?
Thus if somebody, coming from a mac who has the loopback device working with an older mac could explain me exactly ( screenshot for example) how you´ve setup the whole thing within the loopback window, that would help me alots.

i have at hand:
Loopback itself ( which is working with other apps on my M1 mac)
blackhole 2channel ( was working, at least sending audio thru it within the loopback editor)
my 8 channel audio interface ( Behringer UMC1820)

i don´t get the logic versus using two GP instances, doing this with the llopback device.
nothing i tryed so far was working

so, its like:
i don´t understand the logic of how to setup loopback to interconnect two GP3 instances,
or if it is indeeed “also” GP3 which is not working right now with a M1 mac vs. that task.
( and not only the blackhole audio routing app which does not work on the m1 mac for now)

(tryed to have it as short as possible

I don’t think there is anything different with setting up the Rogue Amoeba Loopback versus what you were doing with BlackHole.

After installing/running Loopback, you should get a new device showing up in your Audio MIDI Setup

You can then use this in GP as either your audio input or audio output. Based on what you were trying to do, I don’t think you really need to also set up an Aggregate Device. This would have only been needed if GP didn’t have the flexibility to assign separate audio in and out devices.

This setup is working for me on MacOS Mojave.

GP Instance 1: My guitar input is coming in via my interface, then after my amp sim plugin, routed to the first 2 ports on the Loopback device. 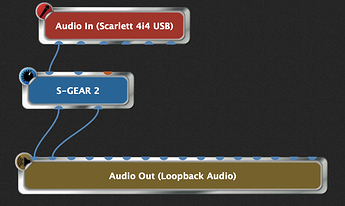 GP Instance 2: The inputs are the first 2 ports of the Loopback device, so it’s passing the audio from the first GP instance to this second one. I then am using a Reverb plugin, before routing to the main outputs on my audio interface. 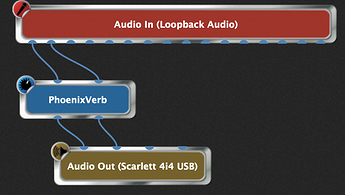 I haven’t done anything special in the Loopback app. But this is what it looks like:

I haven’t done anything special in the Loopback app. But this is what it looks like:

This is supercool !
i just went for a quick test while cooking, and ohh boy,
the connection IS working !..hehehe (on my M1 mac)

The latency is another topic. I need to make a patch that is better suited to check for latency.
in regards to loopback on the new M1 macs:
i run the public Beta, open available at rogue amoeba, AND:
i followed now the install instrcutions for the underlying ACE app !
i had to do this “readjusting” of the security settings…( very fresh mac, i took a Timemachine backup bevore!!)
So yes, Loopback is working on a M1 mac

ok, i was thinking way way to complicated, and its in fact super easy.
your post with the screenshots REALLY helped alots ! ( the one from loopback anyway!)
i had in past times HUGE problems with Loopback, and never understood what i´m doing until 2.0 came out, but still had problems ( with the routing)

Much much thanks @rank13

whats your feel about latencys when routing from one GP3 to a second one?
is it giving you a feel of no latency added ?