Having crashes on startup, unable to reopen Gig file

Lately ive been testing out longer chains of plugins, and this is about the 4th time that I am unable to reopen a gig file. Lots of time went into tweaking the presets, so being unable to reopen the project is rather disappointing. Is there any way to reopen the project to get a copy of my settings back? It is very risky when this happens, changing settings, and saving to update a particular sound, only to realize the project wont open the next time. That is because without duplicate backup files of the gig file automatically being created that allow backtracking, you can lose all the progress of that gig file.

To avoid the crash at startup, you can maintain SHIFT and start GP again.

Yes, but then you don’t have access to your previously designed gig file

Is there any way to reopen the project to get a copy of my settings back?

So a couple of things here — first of all, I think it’s a great idea to automatically backup gigfiles and I’ve put that in our tracking system. Thanks for the suggestion.

You don’t indicate whether you’re on Windows or Mac but it would be great to see the crash report so we could determine why this crash is happening. It’s probably a plugin but it would be nice to know.

If you can remember the plugins you were using, then by using @David-san’s suggestion to open WITHOUT the gigfile temporarily, you could use the Plugin Manager to temporarily disable recently added plugins and then try loading your gig file again. 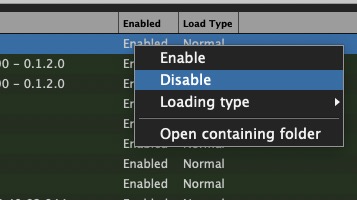 To avoid the crash at startup, you can maintain SHIFT and start GP again.

i had the same problem as the OP, and this tip helped me.
then afterwards, was i able to load the gigfile which caused the crash at startup, manually.

Ok thanks for the suggestions, for about 3 of the different saved gigs that have crashed, I sent in the crash report using the automatic window that pops up after program exits. Or should I post them here?

This last project was strange, I did manage to get it open, but I’m not sure how. Basically, after trying to open the file about 7 times by double clicking on the problematic Gig file, I opened a blank session template saved earlier in the week, then tried to open the project that was giving me issues. It crashed about 3 times, on the 4th try, same thing I did, open blank session, then open problematic Gig file, it finally gave in and opened the session.

I’m not sure which plugin was causing the issue, some in the session were Neural DSP Nameless, Brainworx VH4, Waves Abbey Chambers and Plate, Zynaptiq Wormhole, many of those were extremely high CPU using plugins, maybe that had something to do with it choking the program on startup.

when i had problems with crahses at startup, have i had two FX that were the “souspicious” ones to me.
one of them was the cynaptic adaptiverb.
the other the new installed melda looper, so i had no previous experience with it.

i removed both from my gig/rackspace,
and never had the crashing problem again.
also: was my rack quite CPU hungry since i incorporated the Cynaptic Adaptiverb.

and my “feel” is, that its also good to dissable the “scan for new plugins” at startup checkbox,
in case of such problems. ( again: just a feel, nothing more )