edit: was posted as a wish in the wishlist subforum, but turns out its allready doable ±, with some small hack.

original post was:…(its kind of obsolete) ( and is even more complicated)

Hi,
i know, the header might be confusing…
my request, is btw. not a : this but NOT that thing

i really struggle with the organisation of using different GP3 instances at once.
( Since the use of these GP3 instances would often have nothing to do with each other.
the “stumbling block” is here the “related” open procedure. Related to the first openend GP3 insstance. )
What would solve it finally is:
if i had GP3 available as 4 different programms on my HD, …each to be installed on its own. like:
_GP3-1
_GP3-2
_GP3-3
_GP3-4

should be easy to do, no ?..and i guess you would find easily your way that nobody could trick the “3 computers per user” limitation. (i use the PA unleashed version)

i mean, you could even create it as a option, purchaseable on its own.
I´m in !! ;)…but i guess that would complicate the things unnecessarily.

i often would just want to have a GP3instance open, not beeing my main GP3 Gig, …just a “side-gig”,
just running pianoteq and a little more for example.
right now i would just open pianoteq alone…since i would not want to go thru the “hassle” that if i´d want to load my main GP3 instance, i had to open it “in relation” to my “first opened GP3”, which might just be the “side-gig”, …but the one: allways beeing open

or having a specific FX-GP-device open, yet not beeing my main GP3 gig either.
for example do i move away to load VST-FX into wavelab, i´d rather begin to create own FX chains in GP3.

means: that each GP3 instance would operate completly independend, and independendly remember their last used gig !
The important part: to be able to open any of the GP3 programms (1-4) absolutely without any interdependency to any other GP3 “instance”. …just open each as its own programm.

really, i had many uses to just run a GP3 instance all the time, or even two, assoon i open my computer.
yet these would not be my real main GP3 gig, …just open for some kind of “sidecar” uses.

i mean: on the mac, with loopback in our hands, is GP3 just so powerful for so many different things !
it would help alots to unleash here a way more wide spread use of GP3 !

I am lost, what are you doing?

You know how to use the multi instance feature of GP?

The important part: to be able to open any of the GP3 programms (1-4) absolutely without any interdependency to any other GP3 “instance”. …just open each as its own programm.

@pianopaul I think this is the key request. To be able to have the program name listed differently for the different instances, and be able to open an instance directly, without needing to use the File > Open Existing Instance.

You can start GP with the option:
-in=nameOfTheInstance
to open it with the right settings defined in the instance.

You can start GP with the option:
-in=nameOfTheInstance

I don’t think so.

Yep, ok. I could launch an instance directly from the command prompt using:

You can start GP with the option:
-in=nameOfTheInstance
to open it with the right settings defined in the instance.

would this allow me to open any of lets say Four GP3 instances as i like,
the GP3 instance starts then with the last used gig file ?

the “option” you describe is finally allready above my head.*
it means a stumbling block…i have no clue whats to do, even not, seeing “rank13s” post.

You know how to use the multi instance feature of GP?

yes, i used it sometimes.
but it feels not like made for me and how my brain works.
it creates a hurdle for my brain

i can´t say how much of the given oportunities i missed…but i definitly know:
i would like to have 4 independend programms installed, each with its own desktop Icon.
GP3-1 / GP3-2 / GP3-3 / GP3-4.

it just changes how the brain recognises it.

i give the text command a try, but i´d need a hand

I don’t have a Mac so I don’t know how it works, but it is probably quite close that what exists for Win. The idea is to create a shortcut/link or whatever the name it has on Mac and define it with something like that:

You have to create supplementary instances for that: 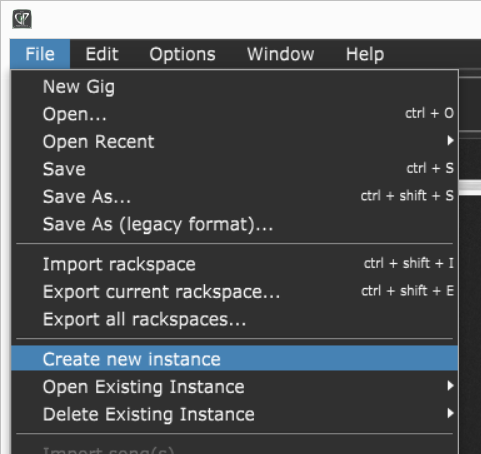 Thnaks fro the help !
i need a guide ti where on my mac i have to type the command in.
…i´m absoluetely lost ion such things.

and how would i handle the whole name sheme ?
can i create founr GP3 instances, named: -1, -2, -3, -4 and then allways open these , in that way, directly ?
do they act each as a own instance that rememebrs its last used gig ?
which would be an absolutely essential point

do they act each as a own instance that rememebrs its last used gig ?

You have to create supplementary instances for that:

yeah, thats what i have donne in the past.

but to me, i can´t open instance #2 bevore i open instance #1.
here the things fell apart for my needs. edit:( my feature request comes from here, that point)

i don´t want to load my #1, change the buffer settings and audio interface settings, to run a side car GP3.,
(edit: which creates the need to change all the settings again when i load my “musik making” GP3 Gig

i can´t comment about, how much of the allready given options i am missing.
so, there is maybe allready a solution ?

i don´t want to load my #1, change the buffer settings and audio interface settings,

Keep the same audio settings for all instances!

Keep the same audio settings for all instances!

i really just freshly run into completly new uses for GP3.
GP3 was so far just a “musik making” device.

but i want to use it also as a “FX Box within my computer”.
thats completly independend uses !
i have even several different uses, …to use a VST Host as a “FX Box”

there is one thing to note on this:
if i use GP3 as my FX Box, instead of loading VST FX into wavelab, or other aplications or VST-Hosts,
is it also creating a common ground to share the specific VST-FX presets.
right now, do i NOT have access to my FX-presets that were created in GP3, …when i´d like to use them in wavelab.

thus on all this, is it a main need to open and run differnet GP3 instance with their specific audio settings,
without any need to chnage anything at start up.
Thats where my request was coming from

Yep, ok. I could launch an instance directly from the command prompt using:

where on my mac would i have to type this in ?

Of course it is. I am talking about sample rate and audio buffer. Whatever you do with your GP instances, of course you can keep identical auidio settings!

where on my mac would i have to type this in ?

There’s lots of utility apps for Mac that can launch scripts, and even ones like BetterTouchTool you can create a separate menu bar icon for each one of them.

But the simple free option is to add the menu bar icon for the Mac Script Editor, which allows you to launch them from a menu: 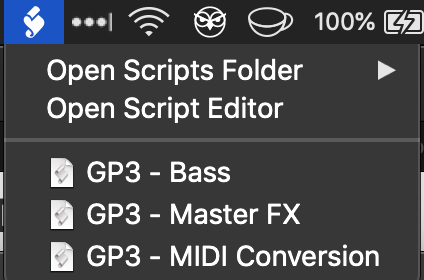 So this can launch the instances directly. However it won’t name the apps separately in the dock - it will still be the same as it currently is - with multiple GP3 app icons, and the instance name listed in the window title bar.

Let me know if this looks helpful, and I can provide instructions.