I’m running GP3 on my MacBook Pro 2017, which has also all my office and work stuff on it, on a separate user account within the computer.

I plan to get a dedicated MacMini for my rig, that is at least as powerful or maybe a little faster to be future proof.

I read through some other SC/MC threads and understand GP is SingleCore. If I compare Geekbench Benchmarks I guess it’s correct to look at Single Core performance only, correct?

I would look for 16GB Ram instead of the standard 8GB.

What else should I look for?

I won’t do anything with it other than live playing, so no recording on that Mac or anything would be planned (or maybe sometimes)…

Very important is a SSD which is large enough
And don’t forget to use a good audio interface.

Yes a SSD is important. I have a small NUC-PC with a 2Tb mSata SSD, and 1Tb is already used

Well, if you use multiple GP instances, then each instance can in principle be in a different core.

The more RAM you can afford the better. SSD is also good but the size really depends on what kinds of plugins you will be running. For example, if you use sample libraries that each use many gigabytes then you need HUGE. On the other hand, if you’re mostly using physical model plugins or synths that don’t use samples, then the requirements are much less.

I use IK Axe I/O which is really tailored to guitar. Not the latest (usb 2) but I can get 4-5ms roundtrip which is awesome in my opinion.

Please note that many plugins actually take advantage of multicore processors. Many well-known plugins will have options that enable multi-core support.

Note however that misusing multi-core could actually hinder performance so one needs to be careful when thinking about multi-core processing. More is NOT always better.

The 2018(current model) Mac Mini has user expandable RAM, which you can max out at 64GB. My choice is the i7 3.2 Ghz 6-core model. Mac Minis are a good lower cost alternative to a MacBook Pro for live use. But you will want to use a battery backup/uninterruptible power supply. You can also rack-mount the Mini with Sonnet Technology’s RackMac Mini.

As RichW says, you can rack mount the mini. I have the Sonnet Tech RackMac mini myself for gigs with 2 x Mac minis (one as a redundant) and can’t recommend it enough. It holds 2 minis and is very solidly built.

Yeah I’ve seen those, but I went PlugIns and GP3 because I don’t wanna carry a rack no more.
I plan to put the Mini under my pedalboard 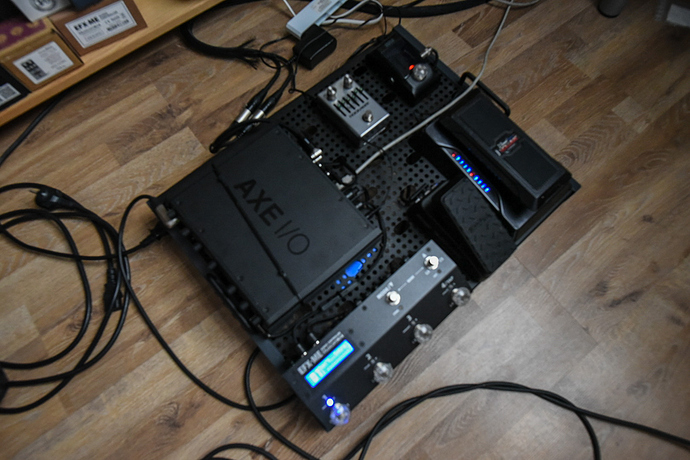 I plan to put the Mini under my pedalboard

Don’t stand on it by mistake!

Well that’s why I put it UNDER the board, where it’s well protected…

@jaeger - Love it!
Thanks for sharing!

yeah and it works perfect. But I hate having to put a USB cable to my Macbook, hence the plan with the MacMini. I will remote control it with an ipad or the Macbook, if needed, but plan to have it load everything on startup, so I just use the midi controller and expresion pedals and no keyboard or screens or anything …

There’s room for a nice fuzz pedal on that board

The Air is about the same price as the Mini, but of course has keyboard and screen and all.

But will the Mini be significantly faster with GP3 and AU Guitar Amp and FX Plugins?

Yes I own an Octron3 which should be there I suppose

i would never go for under 512GB with the SSD in a new macmini.
The HD/SSD is not exchangeable in the macmini 2018/2020
i found 512GB is allready going the very small route.
to have some air here is a good idea.

Space wise I would be fine even with 64GB. Just using a few guitar cab IRs and no samplers or anything large.

But I read about SSDs breaking after a while because they can take only so many “writes” - that was quite a shock to me.