I’m getting ready to upgrade to GP4. In the meantime, I recently had my first gig with GP3 after buying it in April 2020. It was almost perfect. One feature I felt was missing that I hope is included in GP4 or I just need to learn how to do.

I perform with three keyboard controllers with virtual instruments and effects. I set up each rack space with controllers for volume for each sound.

During the show is when I discovered several of the sounds needed to have their volumes adjusted, so I twisted the associated controller to capture it.

What I discovered is that as soon as I returned to that rack space, the edited volume was back to its original level.

Is it my imagination? Shouldn’t what I’m doing save the updated level in that rack space? Maybe it’s as simple as saving the session before I leave that sound? I wasn’t in a position to test things because I was on stage. I’ll test it today before I upgrade to GP4, but I guess, ultimately my question is: what’s the best way to capture slight tweaks when you’re on stage? I didn’t want to click “Save” while performing, and didn’t have time between songs to either.

You know how to capture variation changes into Song Parts?
https://gigperformer.com/docs/GP4UserManual/setlist-view.html

the edited volume was back to its original level.

If the “Also on rackspace activation” is checked, the widget will be reset. If you don’t want it to be be reset when you return to the rackspace, then uncheck that item 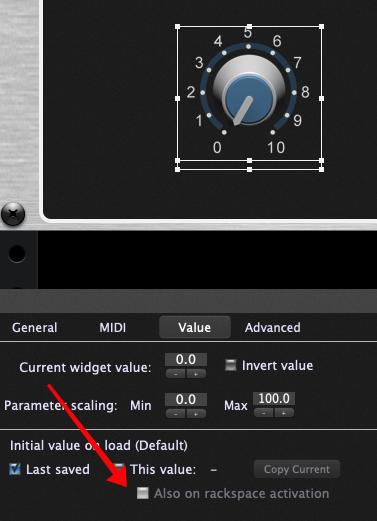 Shouldn’t what I’m doing save the updated level in that rack space?

No — in many cases, when you start a song (or a rackspace again) you want to have the initial settings again. Suppose for example, you have a song where the strings start very quietly and over time you make the strings louder (say).

If you then play that song again, you do not want those strings to start loud – you want them to be reset back to really quiet again

Brilliant. I figured I was doing something wrong. I’ll make sure I check that so any changes I find I need while on stage are captured. Thank you. Yes the reason for both options makes perfect sense.

Follow up…I opened the same Gig in both GP3 and GP4 and can’t change that selection in either. It behaves the same in both: I can select (in GP3) and toggle (in GP4) “This Value” which opens an “are you sure” popup. But I can’t change the selection for either “Last Saved” or “Also on rackspace activation.” I’m sure it’s something I’m missing. Do you know what it could be?

Do you want to change the value? 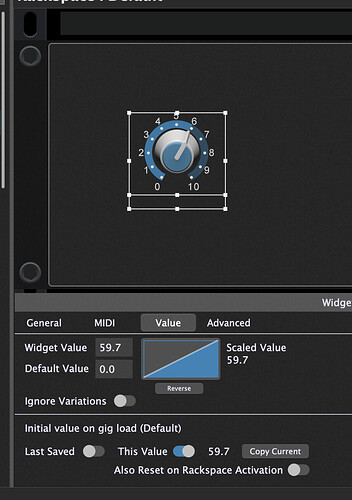 Also Reset on Rackspace Activation is only possible when This value is activated.
And this Value can set for each variation when Ignore Variations is unchecked.