Back Up and DR Strategy

I’ve been playing keys since the mid 70s. I’ve had tons (55+) of keyboards over that time ranging from theelectro-mechanical beasts, to electronic classics, to the current “computers with a keyboard” workstations/synths. I have never once to my recollection, ever gone to a gig and worried about what I would do if one of them outright failed on me in the middle of a gig, and thankfully, it’s never happened.

Now - after switching to a notebook and MIDI controller, for the first time every … I worry. Why? Because it is a stinkin’ computer, and I have seen LOTS of them fail over the years!

So - wondering what everyone does for back-up and DR ? I mean - I back-up my GIG files and assume I could reinstall(and hopefully have no license problems) with all my plugs. What more than that? I suppose if I was super serious about this (e.g. more than a weekend warrior at the local bar LOL), I would probably go out with a duplicate laptop, hot and ready to go. Is anyone doing that? What strategies do you have?

I have an exact duplicate laptop for my backup. It seemed the easiest and most obvious way to be sure at any gig.

In my case it is very easy

We use 2 Mac’s on stage.
I play live keyboards with mine and some backing tracks and lights and video projections are driven by the other Mac.
Now I recorded what I play and in case of a failure of my Mac - my recordings are played back from the 2nd Mac and I simulate playing …

To be serious: In the past I was using a 2nd Mac with the same configuration.

BUT: All failures that occured have been not issues of my Mac.

I have never once to my recollection, ever gone to a gig and worried about what I would do if one of them outright failed on me in the middle of a gig, and thankfully, it’s never happened.

It’s happened to me! And I was at a Roger Hodgson (Supertramp) show a few years ago where they had to stop for 30 minutes to replace a keyboard that stopped working properly.

and I have seen LOTS of them fail over the years

Consider that adults and children use laptops on an often almost continuous basis every day, throwing them into backpacks or briefcases, dropping them on desks, banging on the keyboard for hours on end — well-built laptops are designed to take this kind of abuse so it’s very rare that a decent laptop fails. Further, many of today’s synths are really just computers under the cover, running Linux and with hard drives or SSDs in them.

In other words, anything can break but there’s no particular reason to choose hardware synths over controllers and a laptop these days and many reasons to consider the latter, particularly for touring.

If the show just must go on without any interruption (e.g, theatre, arena gigs, etc) then the solution is to run two laptops in parallel.

is to run two laptops in parallel.

Thought about that.
I still have my old Dell M4800 Precission mobile workstation running Win7 with Brainspawn Forte, as a backup to my new Clevo PB51DDS gaming laptop as Win10 DAW with GP4.

Using in parallel would be interesting to A-B compare sounds from the old to the new system, mainly.

I have all my keyboards and controllers twice, one set for practicing at home, and one set for rehearsal, band studio or tour. During lockdown I had both at home. That came handy for parallel use with my old and new laptop for comparing and transfering sounds and samples. But now each one is at a differnt side.

Once upon a time (15 years ago) I used an application from a company FabulaTech, I think that it was called USB over Network.

We used that to create virtual USB ports on many PCs for hardware dongles and it worked flawlessly.

You stick one hardware key on a PC and share it with (say) 10 PCs - they can see it like the dongle was present on them.

Are you aware of a modern version of this?

It seems that this is still alive

Wimdows 10 and Windows Server 2019 are supported (as well as Linux; macOS is not supported, though)

I just looked….pity it’s not available for Mac. I wonder what is the latency?

What is exactly the use case if this software in the context of this topic? Would it be possible to connect one single audio interface to several computers via network? 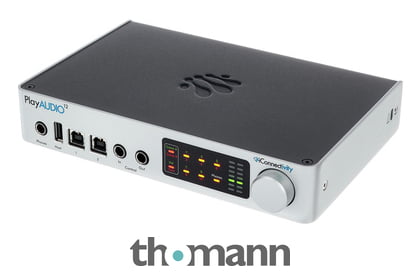 I plan to experiment with this. We used it with hardware keys (dongles), worked perfect back then. I think that we managed to share USB keyboard and mouse, as well (while experimenting).

I’ll try with a USB MIDI controller, and experiment with other USB devices.
Disclaimer: I used this for a long time. Feel free to try it (the trial version is available). It provides a server and a client application.

I am an RME guy

Yes, you can stay on RME, just connect audio out from that to audio in of your rme.

Personally, I will be taking a duplicate system with me. I have setup two SFF PCs, so in the cent of a failure, I’d keep the touchscreen velcro’d to my keyboard and simply unplug the SFF base unit and swap it for the duplicate.

I manually keep both systems up to date and in sync in terms of plugins and drivers and then I keep my main GIG file in a OneDrive folder so it automatically syncs to both PCs and also my studio PC where I do nearly all the programming of my patches.

Ahh - I understood it is an audio interface in itself… I will have to check this.

Looks great!! Anyone using this already here?
Im on RME, too. So how do reports in driver stability compare?