Hi There - just got in my little Arturia KeyLab MKII 49 - quite happy with the size replacing my wonderful but large Fantom. Anyway - so I got it working fine inasmuch as it shows up as a MIDI device on Wiring view and I can play music (VSTs) from it. However, I want to set it up to control the setlist up/down, and no joy so far.

I go to the Global MIDI options page, select the Next Song/Part option, click the “Learn” button, click the arrow button on the keyboard, and Voila! it learned it and stores it. I do the same with the Previous and a different keyboard button. It looks good - like it should work.

I close the dialog, go to set list view, press my buttons I assigned … and … nothing. Any ideas anyone?

Update - I got it to work - somewhat - by going to the Setlist options tab and setting it there. No idea why it did not work Globally when the set list said “use global setting” ?

Anyway - I got it working and that would be fine and the end of it EXCEPT, there seems to be no way to set my buttons to go to the next or previous “thing” regardless if it is a Song or a Song Part! I can do one or the other. there is no choice for a combo, and it won’t let me assign the same button to both functions! I want it to work like the arrow keys on my notebook do - going to the next song or part, whichever is there. Any ideas on this one?

I recently got the KeyLab MkII 61. Great keyboard! (I then bought the V-Collection, which comes at a discount for KeyLab owners. Amazing value.)

OK - further update. I have it working fully (for now) by disabling the option for “Next/Previous Song Part Stays Within Song” and then assigning the buttons to next/prev song part instead of next/prev song. My next goal is going to be to get the dial on the Arturia to also control it, and it would be cool if the Arturia Display would shoe the current song - that may not be possible.

Yeah I had tried using the widgets, but I like this better if it works OK. Regarding:

(I then bought the V-Collection, which comes at a discount for KeyLab owners

I got Analog Lab 4 and 5 “Free” with the keyboard, but was sorely dissapointed that it gives me only a stripped down version of the keyboards - e.g. can’t get to all the parameters/knob! What kind of discount did you get and how?

I just logged in to Arturia dot com (given that I’ve registered the keyboard), and the discount price presented itself. I forget the exact price, but it was something like $250, rather than $500.

So far, I’ve dug into the Hammond B3 and the EMS Synthi of the Arturia V-Collection. So far, I’m impressed. There are little non-linearities in the simulations that feel totally believable. (Note that I have quite limited experience with real Hammonds and zero with EMS products, so what do I know?) It’s little things, like pressing two keys on the Hammond result in some “breath” that you don’t get with either key alone. On the EMS, the feeling is like just going a bit past the limit of the circuit - like barely going over the top of a crest on skis. At that point, things start to break up or get weird, while you dig into the snow quickly to get back on the safe side of the mountain.

I find that it’s best to kind of neuter the direct MIDI input to the plugins and to do everything in GP. It makes for a nice one-stop-shopping experience. You see everything that you can control and nothing that you don’t want to accidentally control in a live setting.

Maybe that’s also why I favor the Widget approach while minimizing what I do in menus and scripts. You can come back to a gig in the far future (wait, I’ve only had GP for about a month!) and see exactly what you have. Of course, there are times when Widgets won’t be enough, but you can leave yourself a note on the panel or wiring view when needed.

If I had known how valuable these things would be, I would never have sold it!

No doubt! Today’s prices are crazy!

But frankly, if you want to cover Dark Side of the Moon, GP, a nice controller, and a few Synthi plugins are infinitely more practical, let alone affordable. Nostalgia and utility are very different things.

You’re preaching to the choir — we do cover that entire album in one of my bands. There are a few others here with PF tribute bands as well.

So, are you using the Arturia plugin, a different Synthi emulation, or something completely different for DSOM? (I’ve been having a blast with the Arturia one.)

I just use an old subtractive synth (The Legend) as I was doing this long before the Arturia EMS showed up. The EMS was pretty basic and it’s such a simple sound, I didn’t see any reason to have to switch over to the EMS when it came out.

Understood. The only really weird thing is the envelope generator. “It’s not ADSR? Wait… this thing loops???”

And there was just one envelope shaper so you couldn’t have a different envelope for the filter and the amp.

I’m still trying to figure out what synth I used in college in 1979. It was my senior year as an EE at UCSB when I finally got the opportunity to take some real electives, and I took an electronic music course. Here’s what I remember, and I probably remember some of it wrong…

It was small to medium sized, like a mini moog with a small keyboard, smaller than 49. It was modular with 1/4 patch cables. It had knobs rather than sliders. I think the patch jacks were located within each module, but they might have been in rows. It had roughly the same complexity as the Synthi, but with ASDR. No sequencer. It had a sample and hold, which was my favorite part. Running the LFO to the S/H to the oscillator frequency control gives that wonderful, random, 12-tone thing. Schoenberg in a box. I think it had black text and lines over a white or metal panel. I’ve looked at Google pics, but can’t seem to find it. Maybe it was custom, but I believe that it was from a US or European manufacturer.

I liked playing it, but had a hard time putting anything on tape. I wasn’t good enough on keyboard to mimic Wendy Carlos and didn’t have the vision to do a Forbidden Planet score. The class was “here’s how it works. Play with it. Give me a tape at the end of the term.” I passed, but my tape was horrible. Looking back, a sequencer would have been golden.

It still bugs me that I don’t know what synth that was! 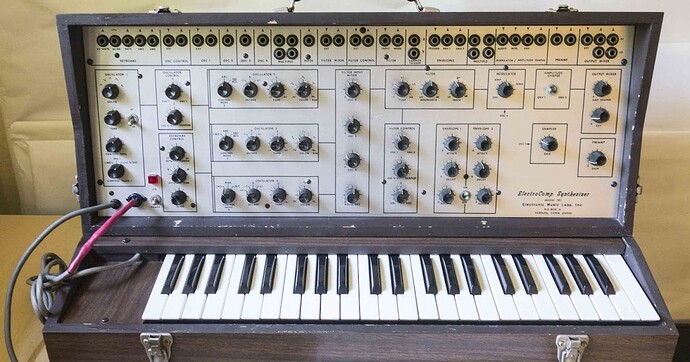 If I had known how valuable these things would be, I would never have sold it!

My first synth ever was a Roland JX-8P and I never sold it. I bought this one because I couldn’t afford the Roland Jupiter 8… and it is still close to be the same now

Well to be honest, now it is rather that I try to resist to every used Jupiter 8 I see…

I think that’s it. Either the EML 101 (with jacks in a row) or the 200 (with jacks at the modules.) I recall an industrial feel (like EML), rather than a consumer sensibility (like Korg.)

Come to think of it, my first synthesizer was a Korg Guitar Synth, which was a disappointment, though I did end up using the distortion and the filter from the wah. 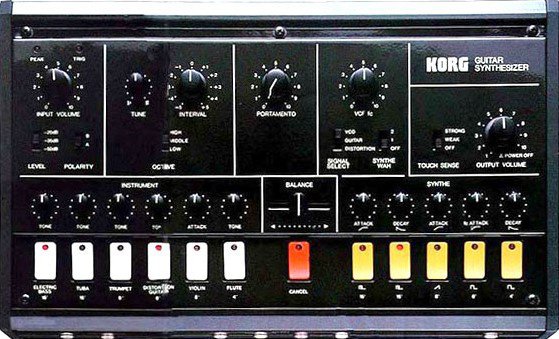 I then got a Juno-60, which I probably would have kept if it had supported MIDI. Bought a Kurzweil PC-88 in the early 90s and still have it. Did some (amateur) film composing with GigaStudio and orchestral samples.

Looping back on topic… my recent search for a light-touch (organ/synth) controller was strongly influenced by my memory of the feel of the Juno-60. And that brought me to the Arturia KeyLab, which I think has a keyboard that exceeds the Juno. It’s a joy to play. And with the V-Collection, I have a virtual Juno-60 and much, much more. Tie it together with GP and virtual effects, and it’s amazing what is available at our fingertips.

I find that it’s best to kind of neuter the direct MIDI input to the plugins and to do everything in GP. It makes for a nice one-stop-shopping experience. You see everything that you can control and nothing that you don’t want to accidentally control in a live setting.

Yeah - I’m following that advice and come to a happy solution more or less. I added the “Next/Prev Song Part” on my Global Rack Space panel and have mapped two of the drum pads on the keyboard to them. Working perfectly, and I don’t ever use drum pads for anything else, so they are like a bank of 16 momentary switches for me. I’m a little miffed that I can’t seem to get the Arturia to map out the left and right arrows when in User mode, but that’s an Arturia problem, not a GP one.

Thanks for the advice! I have it working for what I need now.