Any difficultys by running multiple instances

I am routing my whole band through GP; a Hardware E- Piano + Midi/ VST Plugins over one (the main) instance, the vocals over a second instance of GP.
Currently the durm (E- Drum Yamaha TD-27) is running with the E- Piano Instance (over a VST Drum).
Would it be a problem, in case of resources/ CPU power, to run the Drum over it’s own instance of GP; - is a third Instance needing a lot of CPU power in addition to that what will happen inside of it?
It would make it much more handy for us to run three intances parallel…
The notebooke I am using is quite powerfull in case of CPU.
Thanks
BR
Flodder

Each instance uses a different cpu core, so I see no issue in using 3 instances.

While I agree with what pianopaul said, you won’t really know until you try it.

Even though different instances will run on different cores, when audio starts glitching on windows it’s rarely (in my experience) because the core the audio is running on is over its limit.

On my main audio system, for example, I get random glitching if I run my monitor (4K res) at 60 Hz. At very light load it won’t glitch. But running a DAW or any other ASIO audio app with a buffer around 64 samples will periodically glitch. Might be once every 5 minutes, but it’s there and it’s annoying. Change the refresh rate to 30 Hz and the problem goes away.

Give it a try, and if you start getting crackling the hard part is figuring out what’s really causing it and whether it’s something you can address.

Even though different instances will run on different cores, when audio starts glitching on windows it’s rarely (in my experience) because the core the audio is running on is over its limit.

Well, I remember I had to experiment an orchestral rackspace for another user and I experienced glitches. Then I split the woodwinds in another instance and it stopped glitching. If it doesn’t solve everything to split the plugins into several GP instances, I don’t think it can be wrong.

Thanks for the comments;

I just will try it; but for me it is important to know if a third instance will generally lower the CPU capacity of my device (a notebook with a i7 10700 desktop core).
Currently it sniffs all settings/ plugins without any problem.
In the practice room I have, beside of the notebook screen, a 24” monitor tuning, but I guess graphics will be handled by the GPU and not the CPU.

Anyhow, I will give it a try.

Per David-san’s comments, I think you’re likely better off running multiple instances. But with Windows you can be surprised sometimes.

A related point with windows you might not be aware of is that by default it will turn all of your physical CPU cores into two virtual cores. They call this “hyperthreading.” When an application like GP runs, it gets allocated to a core. If you have hyperthreading enabled, it’s really only allocated to half a physical core. But because windows is scheduling hundreds of processes across the available cores (physical or virtual) you really don’t know how enabling or disabling this is going to work out on your machine until you try. The general advice is to leave hyperthreading enabled unless you run into crackling. Then you can try disabling hyperthreading and seeing if it helps.

GP will actually get assigned to two cores from what I can tell. The audio engine will end up on one, and the rest of the program on another. When you open two instances, chances are the audio engines will end up on two different cores. That’s why, per David-san’s experience above, you’ll generally get capacity for more VSTs if you run more instances.

The caveat with that is there’s a “wall” between the instances. If your drums are in one instance and your vocals in another, they have to remain independent. You can’t do clever things like using the vocals to sidechain a drum compressor. At least not without routing the vocal out to your audio interface and then feeding it back in and bringing it into the drum instance. Which would actually probably work fine, but it would be running on a slight delay and (depending on your audio interface) take up an extra input.

Anyway, that’s why my approach is usually “try it out” and if it’s not working out you come back and start talking about different options.

And speaking of options… Depending on your GPU (I use a Radeon 1070GTX) you might get a benefit from uninstalling a bunch of junk they install by default largely for gaming. But if everything works, don’t mess with it. 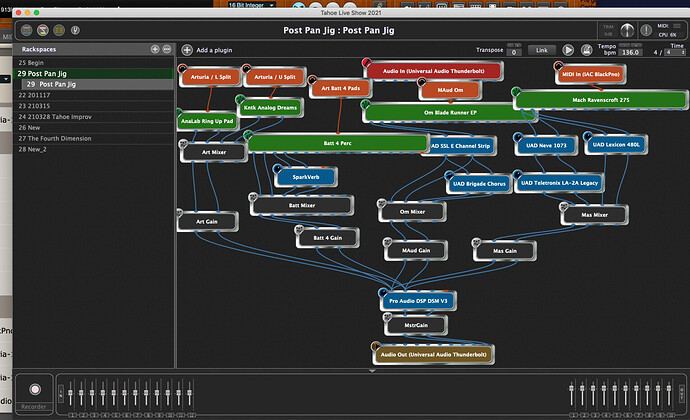 Screen Shot 2021-04-30 at 10.55.47 PM1530×932 312 KB
This is a typical rackspace. Maybe I am trying to sound like my CD and that is impossible.
I can’t believe the quick response!! That is so encouraging as to the quality of people that use this program. There are a lot of interesting people moving the future forward!! Attached is a general setup although I’ve added a Roland Edge into the scenario.

Thanks for the explanation.
I am not sure if my notebook is using the hyperthreading. I just and only use it with GP, I stripped windows totally down.
It works fine so far.

I will try it out with the third instance.
Keep you updated.
Flodder